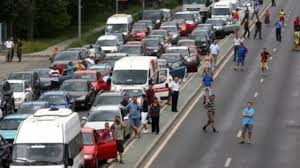 Some 1,664 people died in traffic accidents in Romania last year, while three deadly major highways accounted for one tenth of the deaths, police said Friday.

There were 170 traffic fatalities on the DN1, the DN2 and the DN6, among the best and busiest roads in the country.

Romania led the European Union in traffic deaths in 2019, with 1,800 fatalities, followed closely by Bulgaria. The main cause of accidents are undisciplined pedestrians, police say, followed by speed, undisciplined cyclists, failing to give pedestrians priority,  and disregarding overtaking rules.

In 2020, traffic deaths dropped by 12% from the previous year, but that was because motorists drove less during the pandemic, especially from March to May when there was under a strict lockdown.

Police say that with a lack of highways and major high-speed roads, motorists tend to speed on crowded roads which can lead to fatal car crashes.

„The main causes are speed which isn’t adapted to the conditions, not giving priority to pedestrians crossing the road and incidents with bicyclists,” said Dana Silivestru, a spokesman for the traffic police told Digi24.

Romania’s busiest _ and most dangerous road_ is the infamous DN1,  renowned for its traffic jams as well as accidents.

DN means National Highway; it’s a main road, but not motorway which passes through villages and towns.

The DN1 starts in the capital Bucharest, southeast Romania and heads north through Transylvania, crossing Brasov in central Romania and going on to Oradea in western Romania and Bors, the border town with Hungary.

Last year, there were 160 serious accidents on the DN1 in which 54 people died. Some of the worst accidents happened near the border with Hungary with speeding motorists and a big trucks which blocked visibility to blame.,  Digi24.ro reported.

„I am scared to death, someone comes in a bigger car and cuts me off,  or tailgates me, flashing the headlights to ‘terrorize’ me. People are very aggressive,” one motorist told Digi24.

Car ownership has increased in recent years and powerful cars are popular.

Most serious traffic accidents which resulted in deaths happened on the national roads which cross towns and villages which don’t have ring roads or highways nearby, police said.

Another treacherous road is the DN2 which starts in the capital and heads northeast through Suceava and then goes to Siret on the Ukrainian border.

Some 67 deaths resulted from 147 serious traffic accidents last year on that road.

The third most dangerous road is the DN6 which connects the southwestern city of Timisoara to the southern city of Craiova and then heads east to the capital. In 2020. There were 110 accidents on that road, and 49 people lost their lives.