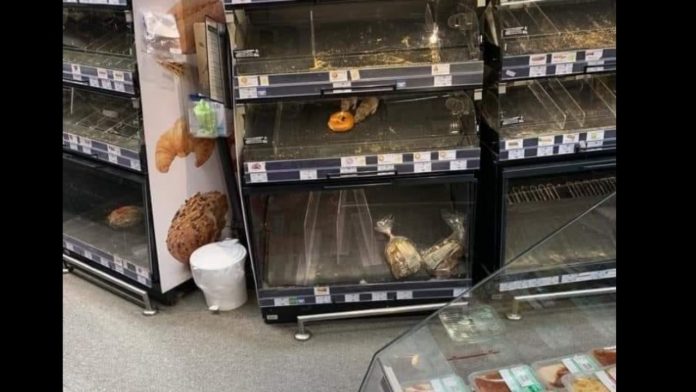 A picture of two rats munching on a pretzel in an upmarket supermarket in the Romanian capital have “gone viral” media reported.

The supermarket, Dutch-owned Mega Image, issued a statement on Wednesday apologizing to its customers.

It said it was unable to „control very many external sources”. That may have been a reference to a garbage collectors who have refused to removed trash in the first district for the past few weeks. They are in a dispute with a local mayor over unpaid bills.

On Wednesday, the picture of the rodents nonchalantly tucking into a pretzel which was in a glass cabinet was trending on Facebook pages in Romania. The lone pretzel was next to empty compartments which had leftover crumbs, or the odd loaf of bread. Hotnews said the picture had gone viral.

The rodents were spotted at a supermarket on the busy Ion Mihalache boulevard, less than a kilometer from the government offices on Piata Victoriei.

In its statement, Mega Image said it used rat repellent “more often than the law demands it.”

It said it had temporarily closed the store on Wednesday for a thorough clean. It added the supermarket  was located in an old building.

A garbage war between the first district town hall and the waste collectors has seen piles of rubbish dumped on the streets of Bucharest’s upmarket first district. Rats have been spotted darting around in the trash.

The dispute is over unpaid bills and the prices the garbage company charges. District mayor Clotilde Armand says the charges are exorbitant. She wants to terminate the contract.

Mega Image is a supermarket chain in Romania that started in 1995. It is owned by Ahold Delhaize, a Dutch grocery retail company.