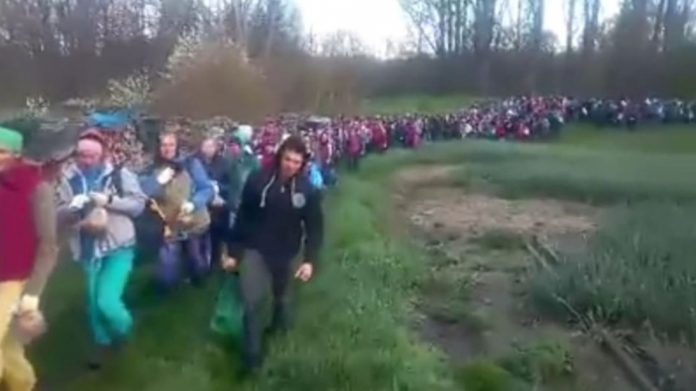 Protests by Romanian farmhands and workers at slaughterhouses in Germany will result in changes to Germany’s labor legislation, Romania’s ambassador to Germany says.

Workers have demonstrated against poor living and working conditions, the last protest being in Bonn on Tuesday when strawberry pickers marched through the city, and stopped in front of the Romanian consulate, asking officials to get involved in their problems, G4Media reported.

They gathered in the street and yelled “Mafia!” and said they were working 10-hour days for 350 euros a month.

Members of the „FAU Bonn” trade union joined the protest on Tuesday, in solidarity with the workers.

„The coronavirus crisis has put the spotlight on a chronic situation, the inequalities in the European labor market,” said Emil Hurezeanu, Romania’s ambassador to Germany said. “People came with a work contract from the country. The farm went into insolvency and was taken over by a judicial executor, which is to pay people’s salaries,” Hurezeanu told Digi24 news channel.

He also said the presence of Romanian seasonal workers has become a political issue, and will lead to the changing of the labor legislation.

„The (labor) minister demands, for example, that subcontractors be eliminated, because employment agents, other intermediary employers intervened in this chain between the employer and the employee,” he said.

„Sometimes there are four or five subcontractors, and the distance between the main employer and the employees has increased greatly to the detriment of the employee. The German labor minister wants to present a project to abolish these chains of subcontractors, mainly in the meat industry,” Hurezeanu said.

They signed a Joint Declaration of Intent pledging to better cooperate in labor and social policies.

„I’m ashamed! Romanian workers must have the same right to social protection and safety and health at work,” the German minister said, according to a ministry press release.

They both agreed that there should be no differences between foreign and German employees in terms of housing, health, and safety at work and that all seasonal workers should enjoy the same rights as German workers in employment contracts.

Thousands of Romanian seasonal workers have been flying to Germany and the UK, with charter flights, to take jobs on farms.

The first flights, which took place just before Orthodox Easter caused an uproar after 2,000 workers crowed together at Cluj Airport not observng social distancing rules.

About 200 workers at a slaughterhouse in Germany were infected with coronavirus at the end of April, the Romanian foreign ministry said.