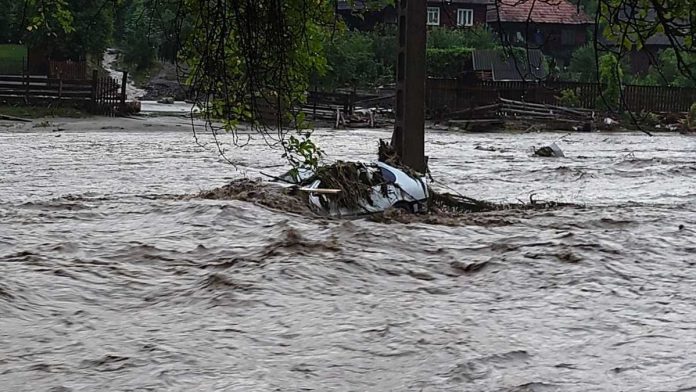 Dozens of people were evacuated after homes and streets were flooded in western Romania when a river burst its banks after heavy rain.

The flash floods swept away cars, caused landslides and uprooted trees in the area. No loss of life has been reported.

Emergency officials were scrambled to help local residents in the mountain village of Ocolis after the Ocolis river burst its banks. Torrents of water gushed through the village of 450.

Three houses were flooded and 20 were damaged by the flash floods, Digi24 reported. Residents took refuge in attics or on the top floor of their homes. Military firefighters were called to rescue residents and pump out water.

In Germany and Belgium entire villages are underwater, while the Netherlands and Luxembourg have also been affected by the extreme rainfall.

In Romania, the damage came after torrential rain in the Apuseni Mountains on Thursday, the Inspectorate of Emergency Situations said.

„Four people were saved and 62 people have been evacuated. Luckily, there are no victims,” the Alba county emergency situations department said.

One road was blocked by a landslide between the town of Campeni and the village of Carpinisi. Eleven houses were flooded, and trees uprooted in the area.

In the town of Roşia Montană which sits on a gold mine, several houses were flooded. One house collapsed due to a landslide, authorities said.

Authorities said there were multiple reports of cars being swept away by floodwaters in  different parts of the county.