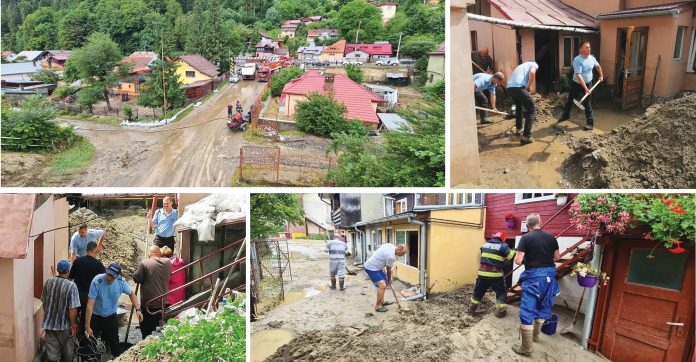 More than 100 houses and guest houses  suffered  flood damage in mountain resorts in southern Romania  after a night of heavy rain. Gardens and roads were inundated, and cars damaged by flash floods.

The torrential rain early Tuesday caused mudslides in Sinaia and Busteni, which are popular tourist spots in the Carpathian Mountains. There was also flooding in Durau, in northern Romania where 60 people on a camp site were cut off by flooding, TVR2 reported. There were no reports of casualties.

Torrents of mud carrying timber and other debris deluged houses and bed and breakfasts in Busteni and Sinaia. People struggled to remove the water and mud from their homes, Digi24 reported.

“We woke at 4 in the morning with water up to our waists….. the car is wrecked”, one resident  said.

Local residents threw out furniture and other objects that was ruined by the floods.

“The water came in through the window. Everything in the wardrobe, bed linen and clothes are soaked. “ another resident in Busteni, north of Sinaia, said.

We haven’t seen anything like it in 40 years, another resident said.

Another man said his wife had a panic attack and was lifted out of the window and taken to a neighbor’s.

On Wednesday morning in Sinaia, water flooded streets and the railway line which lies in the valley.

More than 300 people evacuated after flooding destroys 120 homes in Transylvania. No casualties reported