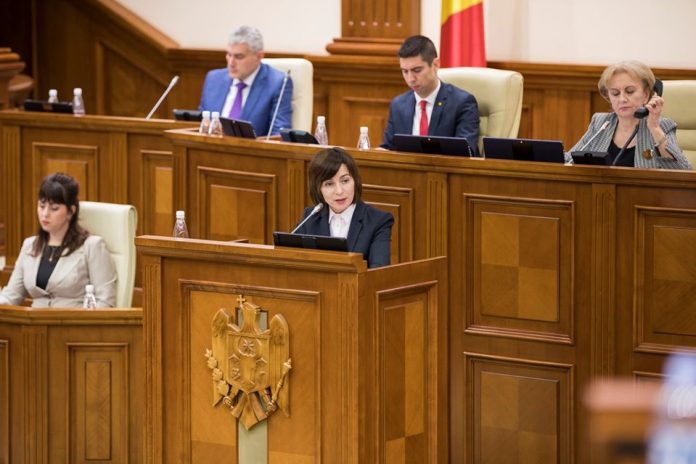 Moldova’s parliament has brought down the pro-Western Prime Minister Maia Sandu and her government in a no-confidence vote, threatening more  instability for the former Soviet republic.

A total of 63 lawmakers in the 101-seat legislature voted Tuesday to oust Sandu, five months after an uneasy governing alliance was formed between pro-Russian and pro-European forces.

The pro-Russian Socialist Party filed the motion on Nov. 8 after Sandu’s cabinet changed the procedure for appointing the general prosecutor, considered a key position in the state architecture.

Sandu, a Harvard-educated World Bank economist, had vowed to fight corruption when she took office in June, and naming the general prosecutor was an important tool.

She accused lawmakers who voted against of being „afraid of real justice. Today you have not only betrayed a government that defends the interests of the people, but you have betrayed every citizen.”

Parties now have 90 days to try to form a new government. If they fail to do so, another parliamentary election will be called.

EU enlargement commissioner Johannes Hahn wrote on social media that he was “deeply worried” by the bid to oust Sandu.

“Any change to her resolute action to reform the country over the last five months would have severe consequences on EU support. Moldovan citizens deserve independent justice and a corruption-free country!” he tweeted.

The Socialists who are led by President Igor Dodon opposed the initiative which would have given the prime minister influence in an important area.

Under the proposal, Sandu who heads the ACUM bloc, would have nominated the prosecutor general. She also wanted the Venice Commission, the EU’s expert body on constitutional law to examine the amendments after they go into effect.

But the Socialists rejected this, on the grounds that the commission doesn’t examine laws once they are in place. The Socialists wanted a special commission in the justice ministry to appoint the general prosecutor.

The collapse of Sandu’s government is another sign that the pro-Russian Socialists are gaining influence in the impoverished East European nation.

A Socialist candidate was elected mayor of the Moldovan capital Chisinau on Nov. 4, the first time a pro-Russian candidate has won the seat since the former Soviet republic declared independence. The Socialists also dominate Chisinau’s local city council.

Moldova has struggled to implement reforms urged by Western institutions since more than $1 billion was looted from state-owned banks five years ago, which hurt the already weak economy in the poor ex-Soviet republic and led to the collapse of one government.

Inconclusive national elections in February sparked a major constitutional crisis in the summer and a showdown involving Dodon, the Constitutional Court, and parliamentary deputies who sought to instal Sandu as prime minister.