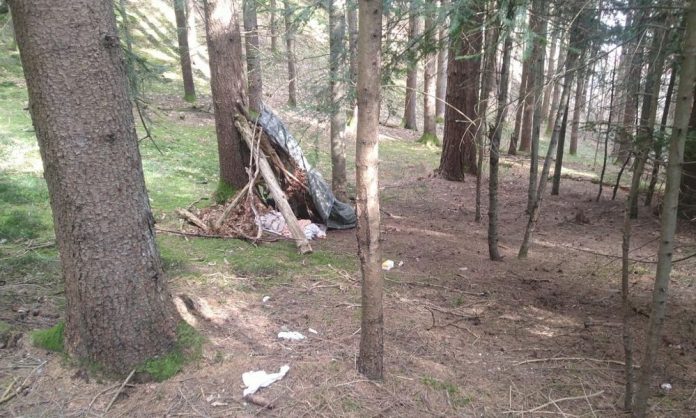 Austrian police have picked up a 32-year-old Romanian man who local residents called “Waldmensch” or „the forest man.”

The unnamed man had been living rough in a forest near the town of Krumpendorf in southern Austria not far from Slovenia and Italy.

He had made a rough shelter from branches and blankets and told police that he’d been living in the forest above Krumpendorf for about a month, neue.at reported.

His bed consisted of a few branches covered with a tarpaulin and several blankets. He had some sausage rolls in the shelter and wore several layers of clothing to keep warm in the woods where the temperatures fall below zero at night.

He was living near a forest road, on a small hill, about 50 meters behind a housing estate, the site reported.

It was unclear why he was living in the forest and what his circumstances were, but he told police he’d been living in forests on and off for about a year.

He was first spotted by a hiker who saw him asleep in the forest and the informed the police as he hadn’t dare speak to him.

„The Romanian was cooperative and went with us straight away, after clearing away his rubbish,” the officer was quoted as saying.

He spoke broken German and English. A local woman told the Kleine Zeitung that he ” had several large bags and a sleeping bag with him.”

„He was taken to hospital to have his health checked but it is unclear what will happen next,” police spokeswoman Waltraud Dullnigg said.

The similar case happened in the area near Wernberg in 2019. A local man from the Carinthia province was picked up at a hut in the forest. He was dehydrated and extremely emaciated.  He was described as ad “dropout” and was living as a hermit until a hiker rescued him.

Krumpendorf stretches along the northern shore of Woerthersee, Carinthia’s largest bathing lake and is described as an immigrant community.