Bucharest Mayor Gabriela Firea has left herself open to accusations of racism after she said the prime minister’s office used to look like “a black people’s bar” when he was deputy mayor of Bucharest.

Firea, who announced this weekend she would seek another term as mayor,  made the incendiary remarks about Premier Ludovic Orban, a political rival, in a television interview on Sunday. “Since his days as the deputy mayor, he’d be sitting in his office like it was a black people’s bar (bar de negri), just booze, just cigarettes and disease-ridden people,” she told Antena 3. “I see that Mr Orban has made no effort to raise his level.”

Orban was deputy mayor from 2004 to 2007. Firea was elected mayor in 2016 and will run in local elections next year. It was not clear how she knew about Orban’s office as they did not work at the city hall at the same time.

Commentator Stelian Tanase called it “a racist remark based on a lie about Orban.” He said Firea “radicalized” a disagreement between the pair after Orban said she was a bad administrator of the city of more than two million.

“Racism and sexism is at the base of the Social Democratic Party which has its roots in communism,” Tanase told universul.net. In other controversial comments, Social Democrat Senator Serban Nicolae called President Klaus Iohannis ‘a Nazi’  in a reference to his ethnic German roots, earning a rebuke from the Elie Wiesel Center.

The expression “black people’s bar” refers to laws that enforced racial segregation in the Southern United States in the late 19th and early 20th centuries.

The laws, known as Jim Crow laws, mandated the segregation of public schools, public places, and public transportation, and the segregation of restrooms, restaurants, and drinking fountains for whites and blacks. They were overruled by the Civil Rights Act of 1964.

Universul.net has contacted the Council for Discrimination for reaction to Firea’s remarks.

The 47-year-old mayor is the favorite to win election if opposition parties don’t agree to support a single candidate.

The opposition Save Romania Union says it will back former leader Nicusor Dan, who is now an independent lawmaker for mayor. But ally PLUS which is run by former Prime Minister Dacian Ciolos supports former health minister Vlad Voiculescu for the post.

The Liberals, who have a minority government, haven’t announced a candidate.

There are moves to change the electoral law to allow two rounds of voting, but it’s not clear whether there is sufficient political support for the change. 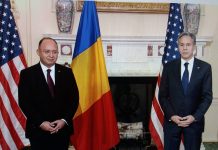