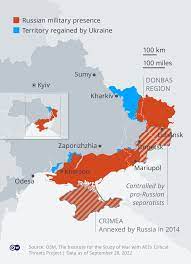 The illegal annexation proclaimed by Putin won’t change anything. All territories illegally occupied by Russian invaders are Ukrainian land and will always be part of this sovereign nation.

The illegal annexation proclaimed by Putin won’t change anything.

All territories illegally occupied by Russian invaders are Ukrainian land and will always be part of this sovereign nation.

Romanian President Klaus Iohannis said: „The European Union, including Romania doesn’t recognize and will never recognize the illegal referendums orchestrated by Russia, which is a serious violation of the independence of the sovereignty and the territorial integrity of Ukraine.”

A statement issued earlier by the members of the European Council reads:

“We firmly reject and unequivocally condemn the illegal annexation by Russia of Ukraine’s Donetsk, Luhansk, Zaporizhzhia and Kherson regions. By willfully undermining the rules-based international order and blatantly violating the fundamental rights of Ukraine to independence, sovereignty and territorial integrity, core principles as enshrined in the UN charter and international law, Russia is putting global security at risk.

We do not and will never recognize the illegal ‘referenda’ that Russia has engineered as a pretext for this further violation of Ukraine’s independence, sovereignty and territorial integrity, nor their falsified and illegal results. We will never recognize this illegal annexation. These decisions are null and void and cannot produce any legal effect whatsoever. Crimea, Kherson, Zaporizhzhia, Donetsk and Luhansk are Ukraine. We call on all states and international organizations to unequivocally reject this illegal annexation.

We reiterate that the European Union firmly stands with Ukraine and will continue to provide strong economic, military, social and financial support to Ukraine for as long as it takes.”