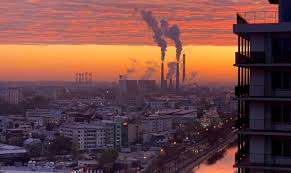 Romania is the seventh most polluted country in the European Union  according to a report by Greenpeace which measured air quality in 106 countries around the globe.

Air pollution monitoring in the capital Bucharest is patchy as only one of six official stations monitors the fine dust which is the most damaging to public health, the environmental group said. However, a number of independent groups have begun measuring air quality, it added.

Europe’s most toxic place is the Balkans. Bosnia-Herzegovina has the poorest air quality followed by North Macedonia, both non-EU countries.

The worst air quality in the bloc is in Bulgaria, south of Romania. Poland and Italy also rate poorly. Cyprus is one place above Romania.

PM 2.5 are very fine particles which are more damaging to people’s health than PM10, coarse particles that come from smoke, dirt and dust from factories, farming, and roads, as well as mold, spores, and pollen.

PM2.5 particles have a diameter less than 2.5 micrometers and remain suspended for longer. They are formed as a result of burning fuel and chemical reactions that take place in the atmosphere.

The cleanest air in Europe is to be found in Finland, Norway and Sweden, the 2020 Greenpeace World Air Quality report says.

Bucharest Romania was ranked  51st in the world for clean air.

“In Romania, authorities don’t  properly monitor PM2.5 in cities. Due to a lack of data, a number of independent networks measuring this pollutant have emerged, which bring valuable data to the public. In Bucharest, only one of the six official stations monitors the fine dust, and that is on the outskirts of the city, next to Morii Lake, so not exactly relevant” said Alin Tanase, Greenpeace Romania campaign coordinator.

Worldwide, only 24 of the 106 countries monitored met the annual recommendations of the World Health Organization (WHO) for PM2.5 in 2020.

Air pollution costs Europe 166 billion billion annually, according to a report this week which looked at the costs of premature death, medical costs and lost working days in more than 400 cities.

More than four-fifths of countries registered improvements in air quality last year, mainly due to less traffic during the Covid-19 pandemic.