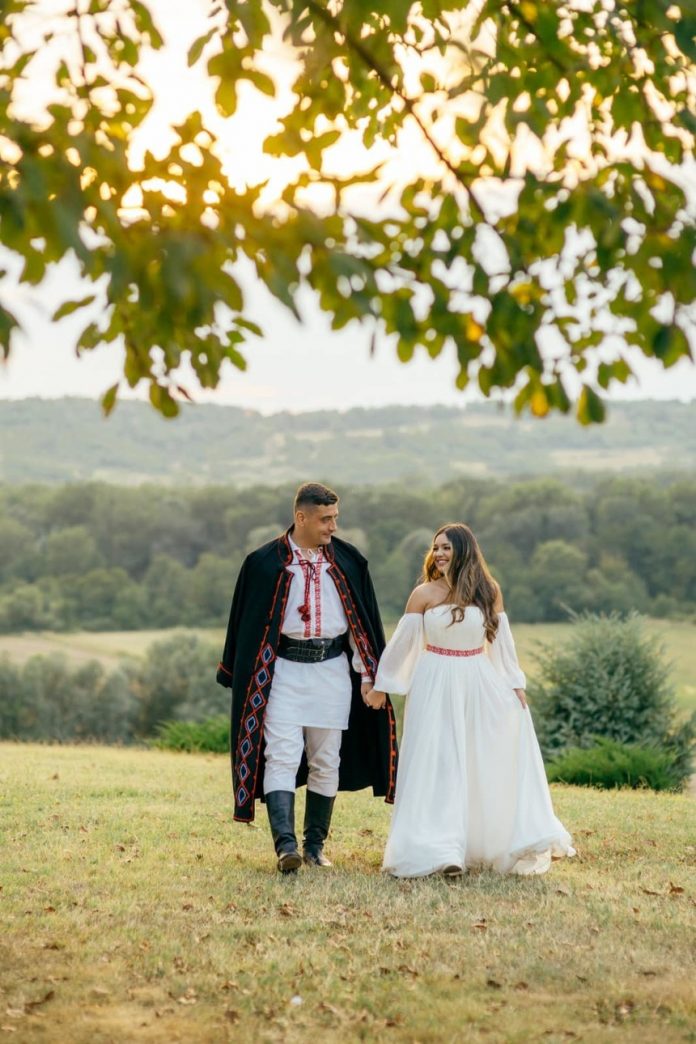 When Romanian rabble-rouser and nationalist George Simion married in a lavish outdoor ceremony this weeend, his main inspiration appeared to be the wedding of a notorious Romanian fascist almost a century earlier.

News of the wedding began almost one month ago. Yet few people knew who the bride –  normally the main attraction – was.

In the case of George Simion, 35, his bride seemed to be almost an afterthought, at least in the runup to the wedding. When he announced he was getting married on Facebook, he even got her name wrong.

The pre-wedding focus was on the sheer size and novelty of the event; the many thousands of guests and the presence of well-known Romanian journalists who enthusiastically promoted the ‘Maciuca nuptials’. Nicu Covaci, the legend from Phoenix rock band and symbol of artistic freedom in the communist era, threw down his credentials to play at the wedding.

“I don’t know if I’m playing at a wedding or funeral,” he said cynically.

More troubling was that the wedding was a copy of the 1925 wedding of Legionnaire Capitanul Corneliu Zelea Codreanu, minus the  80,000-100,00 guests. Codreanu is still a hero for some Romanians despite the fact he led the most bloody and anti-Semitic political movement of the last century.

Commentators said the wedding was to present Mr Simion to the public as a presidential candidate.

At the very least, it was a political and public event to rebrand him as a family man and to keep him relevant in a period when he isn’t really.

This was no celebration of the union of a couple, but a PR event in a long, hot summer to which all Romanians were invited with the following commands: wear a traditional shirt and bring ‘Romanian vegetables’ as a gift.

It was almost as if Mr Simion was trying to hijack the Romanian ‘ie’ and tomato as symbols.

As for ‘true Romanian,’ I’ve never heard of a Romanian wedding without sarmale or meat and rice stuffed cabbage or vine leaves, and the quintessential Romanian ‘hora’ dance.

Romanians of all stripes love their culture and background beyond politics.

Hypocritically, Mr Simion pretended to be offended when the media initially compared the wedding to  the Codreanu nuptials as well as alleging Mr. Simion’s pro-Russian inclinations which are at odds with his so-called pro-Romania stand.

Mr Simion has said nothing about Russia’s brutal invasion of Ukraine and the deaths, torture and kidnapping of tens of thousands of civilians. This ‘great patriot’  said nothing when Hungarian Prime Minister Viktor Orban ‘waltzed’ into Transylvania this summer and treated it as his own bailiwicks.

Even Moldova, the country where his AUR party was reportedly conceived, has banned him.

But to Mr. Simion’s ‘credit’, his wedding was a talking point for the masses and AUR’s stunning fourth-place in 2020  parliamentary elections will go down in Romanian electoral history.

His earlier stunts included jostling with Energy Minister Virgil Popescu in Parliament and accusing him of selling out Romania in front of the cameras which earned him the reputation of a brawler. AUR was born on a wave of anti-vaccine and anti-mask protests.

Trouble is, with no more pandemic restrictions, he needs to invent a new cause.

What better than a wedding in a meadow in Maciuca, a village in the Carthpathian foothills (strangely with no obvious family connection to the bride or groom.) Bit of a sham really. In fact, why bother with a bride at all, except you need one for a wedding. There’s a political point to be made here too.

“It’s a man and a women getting married,” he thundered on the eve of his wedding, as if in Romania any other nuptial format was legally possible. To ensure that the nuptials were truly oversized, he had 40 sets of godparents, a pair from every Romanian county.

But let’s not be too hard on Mr Simion; he entertained the public over the weekend and pierced the summer stupor.

Who can forget the grand wedding of President Traian Basescu’s daughter in upmarket, Snagov, more discreet in its message, but definitely political.

If Liviu Dragnea had managed to hang on to his ‘strongman of Romania’ title, the PSD and his girlfriend, we’d have been treated to another political PR wedding. Even rumors of the event was enough to get him a few extra headlines.

It’s not just Romania. Boris Johnson, the outgoing British prime minister, got married in Downing Street during lockdown. The ‘discreet’ event replete with haybales and the barefoot bride dressed in a flowing smock (loaned, not bought, more ethical) with a garland of wild flowers around her head (like a British Ileana Cosânzeana), was pure political PR, however loved-up the couple was.

The aim of these political PR weddings in Romania and the UK, is to make the public coo– simply to view their politicians as human beings, family men and women.

The message is ‘create a feel-good factor.’ Anyone who snipes is mean and joyless or on the payroll of the opposition or foreign forces (in Mr Simion’s case) .

But don’t count on the feel-good factor forever. Mr and Mrs Johnson faced public opprobrium when they were planning to host a grander post-pandemic wedding in the glorious Chequers Estate this year.

Sir Arthur Lee gifted the Chequers, a 16th century manor house, to the British government in 1917 in which to entertain foreign dignitaries or a tranquil place to relax from the affairs of state.

While previous British prime misters had always belonged to the landed classes, the post-WWI era brought in a new breed of politician, who did not own spacious country homes.

Mr Johnson went for plan B. A second wedding was hosted by a rich Conservative Party donor with a suitably large estate—- and less publicity.

In 2018, then Austrian foreign minister Karin Kneissl, linked to the far-right Freedom Party (FPÖ), danced with Russian President Vladimir Putin at her wedding.

Opposition politicians accused her of undermining EU foreign policy with her choice of guest.

She left the Austrian government in 2019 and last year was nominated to the board of directors at Russian state oil giant Rosneft.

George Simion denies any links to Moscow which would cost him politically in Romania. But if he hadn’t we may have seen Russian Defense Minister Sergei Shoigu dancing a ‘hora’ in a Carpathian meadown in the Romanian twlight.