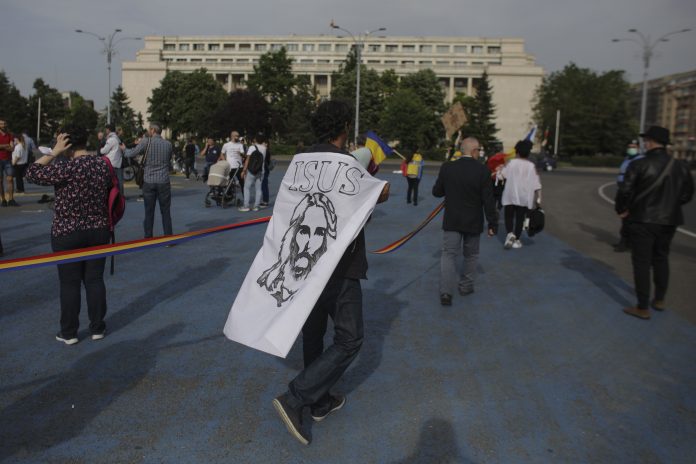 More than 100 protesters gathered in downtown Bucharest on Friday evening calling for the resignation of the government over measures imposed during lockdown.

The protest “against dictatorship” outside the government offices in Victory Square was promoted by social media groups who support Russia, and who are skeptical about the existence of the coronavirus.

Adrian Severin, a former foreign minister who served as a European Parliament lawmaker took part in the protest. Severin was sentenced to four years in prison in 2016 for bribe taking and influence peddling.

The protest came a day after some 2,000 took part in a similar demonstration in the Bulgarian capital, Sofia, organized by a pro-Russian party, Agerpres, the Romanian national news agency reported,

Protesters marched through Sofia to berate the government for imposing restrictions during the coronavirus pandemic.

The demonstration in Bucharest is illegal during the current state of alert where mass gatherings are banned. Protesters were not wearing face masks which became  compulsory in some public places on Friday. Two protesters were detained, riot police said.

Protesters said resented measures taken during the state of emergency which violated their constitutional rights.

Protesters demanded the resignation of President Klaus Iohannis, the government, and some lawmakers for “confiscating Romanians’ rights and allowing abuses during the state of emergency,” imposed on March 16 which ended Friday.

The United Civic Front which supported the protest has posted messages such as “natural immunization” and “say no to lockdown” Some of those at the protest said they didn’t believe the virus existed claiming it was a global conspiracy.