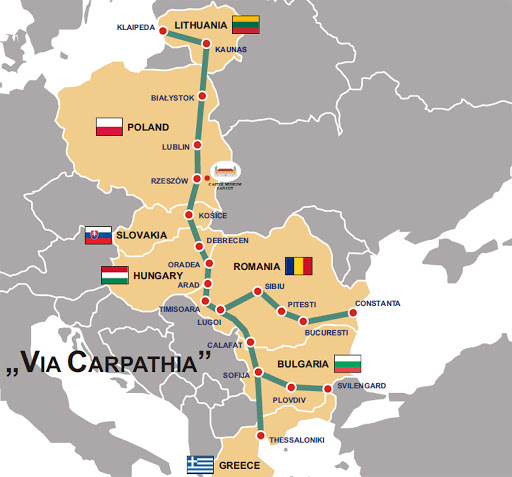 Romania’s transport minister on Monday welcomed an ambitious U.S. project to build a highway and railway line linking the Baltic Sea to the Black Sea.

“These projects are a real benefit for the economies of the partner states and the regional economies,” and will attract investment funds, Mr. Bode said. “Our efforts and reliability are beginning to reap rewards.”

The announcement of the massive regional infrastructure project was made Friday by U.S. Ambassador Romania, Adrian Zuckerman in Washington at the Department of Energy Intergovernmental Agreement between the U.S. and Romania.

“We are embarking on a new project for Romania, with Poland, to build a highway and railroad from Constanta…. to Gdansk.”

The railway line will be 3,663 kilometers  (2,290 miles) long and go south from Poland to Slovakia, Hungary and Romania, which are all NATO and EU states, minister Bode said Monday.

„I welcome the U.S. initiative, our strategic partner… to support Romania in its economic, energy development and now road and rail infrastructure,” he said.

Romania and Poland are the U.S.’ closest allies in Eastern Europe and have outdated infrastructure, inherited from the Communist era.

The infrastructure projects are part of the Three Seas Initiative, which groups 12 European Union members along a north-south axis from the Baltic Sea in northeast Europe to the Adriatic Sea in the southeast and the Black Sea in the east.

The project aims to develop the economies in central and east Europe which lag behind their western counterparts by connectivity in transport, energy and digitalization.

For Romania, the main project is the Rail-2-Sea which will be a rail link for civilian and military use between the Polish port of Gdansk and the Romanian Black Sea port of  Constanta.

The project will update antiquated rail corridors and allow for high-speed rail travel for military personnel.

The Via Carpathia project will create a transport corridor from Lithuania in northeast Europe, though Poland, Slovakia, Hungary, Romania, Bulgaria and Greece, integrating the transport system of all the countries which are NATO and EU members.

The U.S. Ambassador said the infrastructure projects would “be a tremendous boon to the Romanian and Polish economies, and regional economies, for years to come.

“Romania, along with Poland, is the defense lynchpin against Russian aggression on Europe’s eastern flank,” the ambassador said.