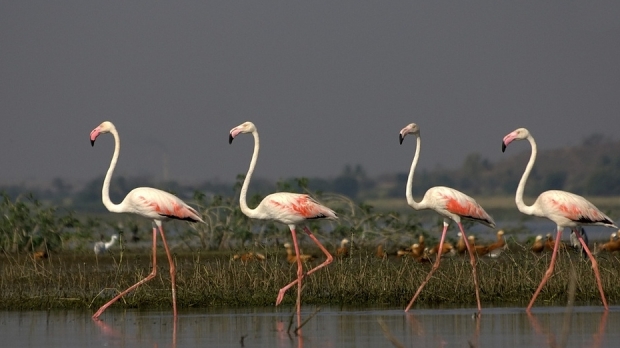 Ten flamingos have been spotted in Romania’s Danube Delta, the largest flock seen in the area in the past 100 years, authorities said.

The birds were seen on Saturday in the Meleaua Sacalin area in the southeast of the Danube Delta, the Danube Delta Reserve Administration said Monday in a Facebook post.

The flamingo’s nesting ground is around the Mediterranean, with Greece, Turkey, and Montenegro, the closest to Romania, ARBDD said.

„In Romania, the bird seldom makes an appearance (and if it does) it’s in the southeast of the country in small numbers…. The first sighting was in 1900. This is the biggest group of flamingos observed in Romania in the last century.”

Outside their reproduction period, the birds have high mobility. Flamingos from the easterm Mediterranean, such as Egypt, Lebanon, Greece, or Turkey have been captured in France’s Camargue area, or even observed in Scandinavia, ARBDD said.

There are some 300 species of resident and migrating birds that can be found in the Danube Delta, including cormorants, white tailed eagles, swans and pelicans.