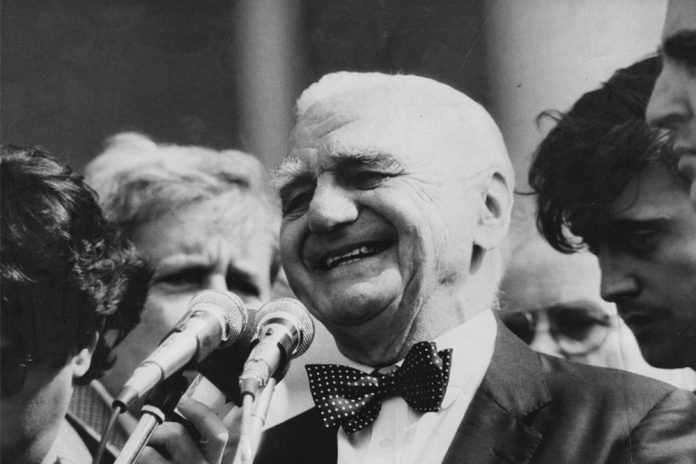 Romania is marking 20 years since the death of Ion Ratiu, a symbol of democracy and debonair style, dubbed “the best president Romania never had.”

Ratiu, who once chained himself to the railings outside London’s Ritz hotel to protest the plight of Romanians under communism, died in London on Jan. 17, 2000 after suffering esophagus cancer.

Such was his appeal, that former political rival, ex-President Ion Iliescu declared: „unreservedly… his death is a great loss for Romania’s political life.”

Iliescu wasn’t always so civilized. In June 1990, vigilante coal miners, acting on behalf of Iliescu descended on the capital to break up a protest, and ransacked Ratiu’s home and manhandled him. Ratiu and his wife Elizabeth sought refuge in the British ambassador’s residence which was on the same street.

A former Prime Minister Victor Ciorbea, summed him up at the time, saying: „He brought a tone of Western democracy but also nobility and fair play.″

Twenty years on, Ratiu’s vision of a democratic Romania integrated into the West has been fulfilled; he remains a benchmark for civic society.

That’s also due to work and programs carried out by the Ratiu Foundation based in his home town of Turda, which promotes democracy, a free press, civic activism and a global vision of the world in which Romania plays a part.

The foundation is run by his sons Nicolae and Indrei Ratiu, and Indrei’s wife Pamela Roussos-Ratiu.

After losing the presidential race to Iliescu in May 1990, Ratiu did not run again, but set up the Cotidianul daily newspaper continued to be a leading member and offer financial support to the National Peasant Party which came to power as the main force in the Democratic Convention in 1996.

Nonetheless, Ratiu continued to push for his dream of Romania finding a place in European mainstream. At the time of his death was the head of the Romanian delegation of the Parliamentary Assembly of NATO.

Ratiu’s family were from Turda, Transylvania, and helped unite Romania in 1918. He became a diplomat and left the country in 1940. The communists took over Romania in 1947 and Ratiu did not return until the regime collapsed.

He settled in Britain and worked for the BBC, before going into business. During the last years of the rule of former communist dictator Nicolae Ceausescu, Ratiu’s Free Romanian newspaper was one of the only reliable sources of news about the country.

When Ceausescu visited Britain in 1977 and was knighted by Queen Elizabeth II, Ratiu chained himself to the railings outside the Ritz Hotel in protest Britain’s treatment of Ceausescu’s repressive regime.

Traumatized from decades of communism and being isolated from Europe, Romanians were too wary to elect the man they called “`Mr. Bow tie,″ partly because of his English manners and partly because he hadn’t suffered the same hardships as millions of Romanians.

But thirty years have seen a change in attitudes and cemented his legacy as a patriot with a Western vision for Romania. And that’s something that would have given him satisfaction.