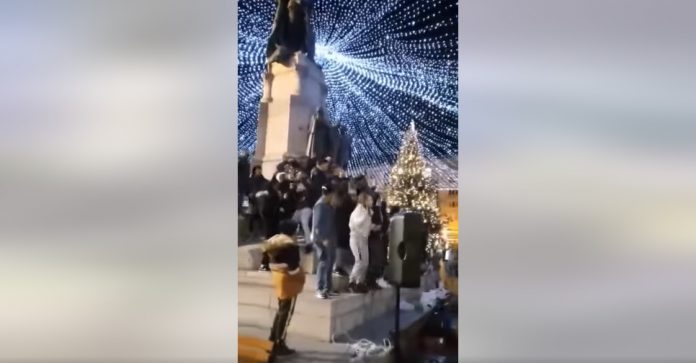 Romanians who danced to ‘manele’ or Gypsy pop music on the plinth of a statue of Prince Alexandru Ioan Cuza, one of the fathers of modern-day Romania, now find themselves the subject of a police investigation.

The group filmed their prank in the historical city of Iasi, northeast Romania and posted it on social media.

Cuza was the first prince of the united principalities of Moldavia and Wallachia which was the precursor to the modern nation state which emerged after World War I. Moldavia, now known as Moldova and Wallachia reunited with Transylvania to become modern-day Romania in 1918.

The group’s dance took place during celebrations to mark Nation Union Day on December 1. They put speakers up to amplify the music.

Police have opened an investigation on charges of ‘profaning public monuments.’

Alexandru Ioan Cuza was the ruler of the Romanian principalities through his double election as prince of Moldavia in January 1859 and prince of Wallachia the same month, which resulted in the unification of both states.

Following his double election, he initiated a series of reforms that contributed to the modernization of Romanian society and state.