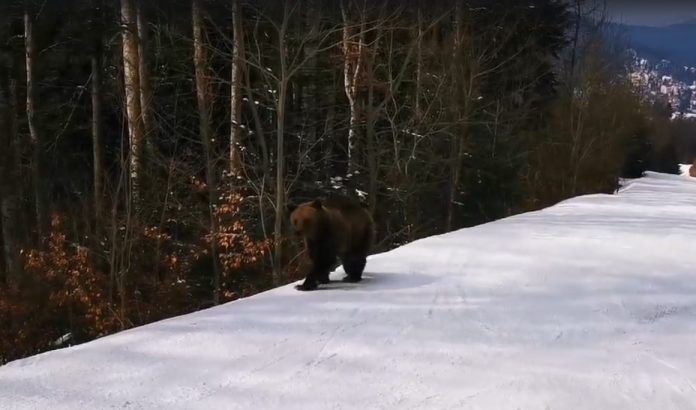 The sudden appearance of a brown bear on the ski slopes in the Carpathians scared a group of skiers who were trapped on the mountain not wishing to startle the animal.

The ski instructor who was acting as a guide near the mountain resort of Predeal asked the group of around 20 to not move and to make noise to try and convince the bear to leave them alone.

But the large brown bear seemed curious about the group and wouldn’t scamper back into the forest.

It is the second appearance in recent weeks of a brown bear on the ski slopes in the same area, showing how relaxed they have become around humans.

The ski instructor, Adrian Stoica, who filmed the incident, stayed calm and tried to cajole the animal back into the woods, speaking gently and joking to it. But it wouldn’t budge.

Finally, he offered himself as bait and began skiing down the mountain. As expected the large animal chased him as he skied downhill coming dangerously close at times.

But the good-natured and brave guide didn’t lose his cool and continued to try and persuade the bear to return to the forest.

Finally, after seven minutes, either bored or tired out by the chase, the bear lumbered back into the woods.

The instructor can be heard telling the other skiers that the coast _ or the slope _ is clear, and they ski down the mountain.

Romania is home to an estimated 6,000 brown bears. Bear hunting was banned in 2016, a move praise by environmental groups and animal rights activists.

Most bears are in the Transylvania region. They sometimes descend onto farms, villages and towns in search of food, including from rubbish bins and containers, or be fed by curious tourists.

In 2019, six people were killed by bears in Romania, with scores of non-fatal attacks also reported. It was the worst year for fatalities this century.