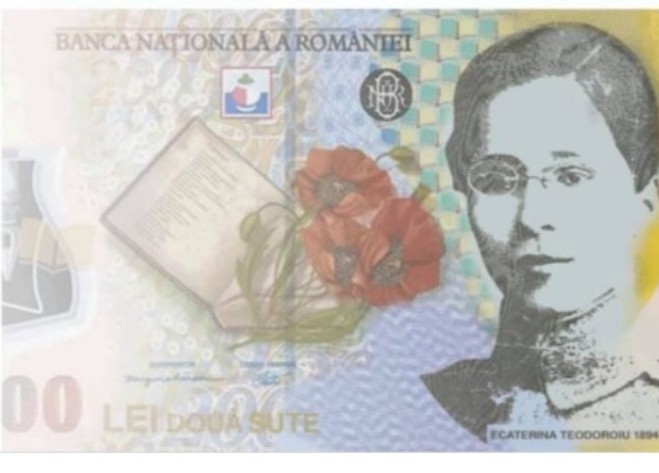 World War I heroine Ecaterina Teodoroiu, named „the  Joan of Arc” of Romania by a prominent French general is to become the first woman to feature on a Romanian banknote.

Ecaterina Teodoroiu (1894-1917) will appear on a new banknote of 20 lei (worth about four euros) starting this autumn, a European Parliament lawmaker announced Sunday.

„I was very happy to hear that starting this autumn…. the National Bank of Romania will mint a bank note with the portrait of a woman who is representative for the country’s history,” MEP and former European Commissioner Corina Cretu wrote on Facebook.

She said it would “encourage positive affirmation of women and the recognition of the substantial contribution they had in different moments of history.”

Ecatera Teodoroiu, was born Cătălina Vasile Toderoiu, in January in Vădeni in southern Romania. She was a scout and a nurse who subsequently became a soldier and took part in World War I.

At the beginning of the war, she worked as a nurse. She then joined reserve soldiers to repulse the German Army near her home.

The Romanian royal family were apparently impressed by her bravery and invited her to Bucharest. She then traveled to the front line to see her brother who was a sergeant. He was killed by an artillery shell shortly afterwards.

Wishing to avenge her brother’s death, she joined the 18th Infantry Regiment as a volunteer.

She demonstrated her military skills after the regiment was surrounded by German troops. She announced in German that her regiment would surrender. She then shot and killed several Germans and allowing most of the company to escape.

She was later captured during another battle, but but managed to escape by killing the German soldier guarding her with a concealed gun.

The Germans continued their advance and she was injured during skirmishes. She was hospitalized and recovered.

She was decorated with the Military Virtue Medal for her courage. She then asked to return to another regiment as a voluntary nurse.

For her bravery, she was awarded a number of medals and given the command a 25-man platoon, becoming the first ever Romanian woman to be an Army officer.

In September 1917, while leading her platoon in a counterattack, she was mortally wounded by machine gun fire.

Her dying words were: „Forward, men, don’t give up, I’m still with you!”

It was an unusual decision for a woman of that era to join the Army and she was regarded as a symbol and as a brave soldier.

French General Henri Berthelot even named her the „Joan of Arc of Romania” for her outstanding bravery, patriotism and self-sacrifice.