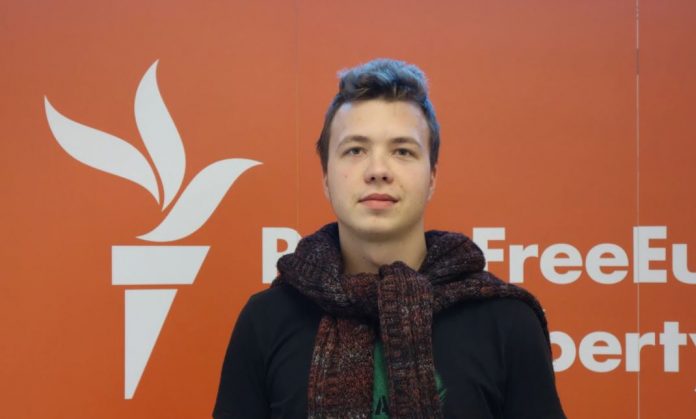 Mr Protasevich will be the recipient of the 2021 Ion Rațiu Democracy Award and Fellowship, a press statement said Friday.

The 26-year-old is the former editor-in-chief of the Nexta Live channel, which is based on the Telegram messenger app. It has more than 1 million subscribers and is the primary source of news for the 2020-2021 Belarus rallies.

Mr Protasevich was detained by Belarusian authorities on May 23 after an international passenger flight from Athens to Vilnius was intercepted in Belarusian airspace by a Belarusian fighter jet and ordered to land in Minsk.

The prominent dissident, who had been living in exile, was arrested upon landing and now faces a 15-year prison sentence in Belarus.He has been a vocal critic of autocratic Belarusian leader Alexander Lukashenko.

Recipients of the Ion Rațiu Democracy Award and Fellowship have the opportunity to engage with the Washington policy, media and scholarly communities.

Awardees are provided with a stipend to spend from one to three months at the Wilson Center in Washington, D.C. for the duration of their stay.

The award expresses the deep commitment to democracy of the late Ion Rațiu who died in 2000. Mr Ratiu was a Romanian diplomat nefore World War II and a politician who sought to bring democratic reforms to Romania after communism ended.

Tthe Ion Rațiu Democracy Fellowship supports individuals around the world who are working on behalf of democracy as activists or intellectuals, whether they are in exile from repressive regimes or operating within emerging democracies.