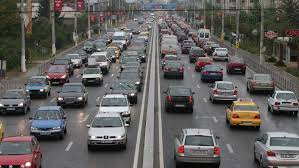 Bucharest’s city hall will ban heavily polluting cars from the center of the capital and introduce a tax on other cars in bid to reduce pollution and heavy traffic in the Romanian capital.

The worst offenders, known as Euro 1 and Euro 2 cars, will not be allowed downtown regardless where they are registered starting from 2022, the Bucharest General Council voted Thursday under a new measure dubbed the “Oxygen Tax.”

About one in five cars fall under that category. Starting Jan. 1 those motorists will have to pay a tax or “Oxygen vignette” of 15 lei a day to drive in the rest of the city under the Clean Air Action Plan called  ZACA in Romanian.

“The most important factor of pollution is ….. car traffic, and the number of cars is increasing exponentially. (A total of) 1.6 million cars are registered in the Bucharest-Ilfov area,” said mayor Gabriela Firea earlier this year. Ilfov is the county north of Bucharest where many people who commute to the capital live.

Mid-range polluters, Euro 3 and Euro 4cars, will be allowed to travel in the city center but pay a daily tax of 5 lei starting from 2020 and 2021 regardless of where the vehicle is registered.

The number after ‘Euro’ refers to European emission standards which define the acceptable limits for exhaust emissions of cars sold in the European Union. The lower the number, the older and more polluting the car.

People who live in Bucharest or drive to the city frequently will also be able to buy vignettes for one month, six months or one year. Prices for one-month vignettes vary between 80 lei for Euro 4 cars and 300 lei for non-Euro cars.

Electric and hybrid cars, as well as Euro 5 and Euro 6 cars, the least polluting, will have unrestricted access throughout the city. Police and city hall employees will enforce the measure.

Firea said that while the measure appeared harsh: “Bucharest has reached an undesirable sixth place in the top of the most polluted cities in Europe.”

What the numbers mean: