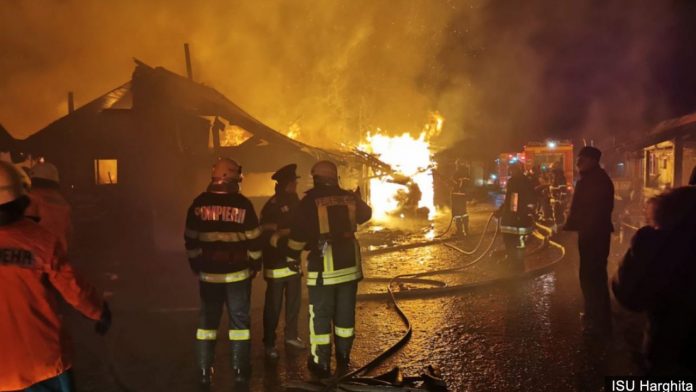 Firefighters battled to contain a fire that swept through a community of poor Roma in eastern Romania destroying 20 houses and leaving hundreds homeless, authorities said. No deaths or injuries were reported.

Some 230 people were evacuated from their homes on the outskirts of the city of Miercurea Ciuc  late Thursday after they burnt down. Authorities moved them to a sport’s hall in the city.

The Inspectorate for Emergency Situations said it had dispatched four fire engines and dozens of firefighters to fight the blaze in a suburb of the city which was put out after several hours.

„Some 20 wooden houses over 1,000 meters were affected by the fire,” a statement said.

Authorities made appeals for help for the Roma who are among the poorest residents in the city where more than 80% of the population is ethnic Hungarian.

“We are talking about very poor people. To look after a few hundred people, any help, even a cup of tea is welcome,” Miercurea Ciuc mayor Attila Korodi said. „I know some restaurants are helping out.”

The mayor said the city hall, the Caritas charity, and social welfare department of the county council, hospitals, the Army and neighboring town halls would provide mattresses for the homeless.

Mr. Korodi said 230 people were currently being housed in the Eros Zsolt sport’s hall and another sport hall was on standby if needed.

The city of 38,000 is the capital of Harghita county and is the coldest region in Romania.  On Friday it was -1 C.

The chairman of the Union of Democratic Hungarians in Romania, Hunor Kelemen also made an appeal on his Facebook page.