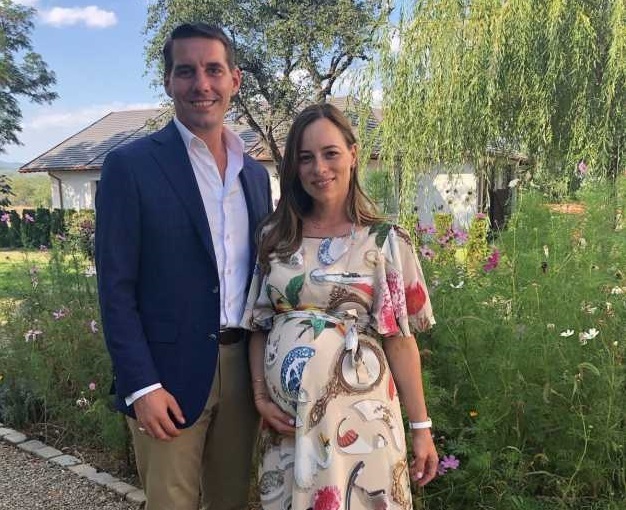 Former Romanian royal Prince Nicholas has welcomed his first child with his wife.

Nicholas Medforth-Mills, 34, is the grandson of King Michael, Romania’s last king and a distant cousin to Queen Elizabeth II, announced  his wife Alina-Maria Binder had given birth to a daughter over the weekend.

„It gives me great pleasure to announce the birth of my daughter, Maria Alexandra, on 7th November at 20:05 at the Polizu Hospital in Bucharest he said in an announcement on Facebook.

Nicolas wrote: ‘Alina-Maria and our daughter are both well and healthy.

‘This is a very special moment for our family and we are grateful for the support and shared excitement of Romanians, but especially the efforts of the medical staff during these challenging times.’

Nicholas Medforth-Mills is King Michael’s only grandson and would have been third in line for the Romanian throne if it still existed.

But he was removed from the line of succession to the symbolic Romanian throne and stripped of his royal titles reportedly over a family feud.

One reason may have been that Nicholas fathered a child with a Romanian woman, a situation that was said to have affected Michael badly as an echo of his own unhappy childhood. Michael’s father, Carol II, married three times and was forced to give up the succession to the throne over an affair while he was still married to Michael’s mother, leaving Michael to be king when he was only 5. Carol later did become king.

The former prince’s good looks, down-to-earth manner and love of cycling and ecology endeared him to Romanians.

The couple married in Sinaia in September 2018. He met now-wife Alina-Maria a year before Romania’s Royal House announced its decision to disinherit him.

However, he recently said that he hoped the birth of his child would bring the family together again and repair the rift with Margareta, the custodian of the monarchy and her husband Radu.

“My uncle King Michael protects us and I am proud to carry the name further,” the former prince said in his post wishing people called Michael and Gabriel a happy name day.

Prince Charles is an avid fan of Romania and he frequently visits the country. He was one of Europe’s royals who attended King Michael’s funeral in 2017.