At least 14 people have died in a  helicopter crash near a kindergarten close to the Ukrainian capital Kyiv, including the Ukraine’s interior minister and other officials who were traveling on the chopper, officials said.

A further 25 people, including 11 children, were injured following the incident in the town of Bovary on Wednesday, according to the State Emergency Service of Ukraine (SES).

Fourteen bodies were found at the crash site, including one child and all nine people who were on board the helicopter – six ministry officials and three crew members.

Search and rescue operations have ended at the crash site, the SES said on Wednesday afternoon.

The Ukrainian Security Services, the SBU, has launched an investigation into the crash, and posted on Facebook that “several versions of the tragedy are being considered.”

They include: “Violation of flight rule, technical malfunction of the helicopter (and) deliberate actions to destroy the helicopter.”

There has been no suggestion from any other Ukrainian officials about Russian involvement in the crash.

Ukraine’s President Volodymyr Zelensky described the incident as a “tragedy.” 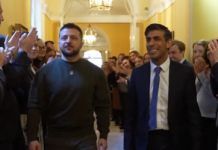