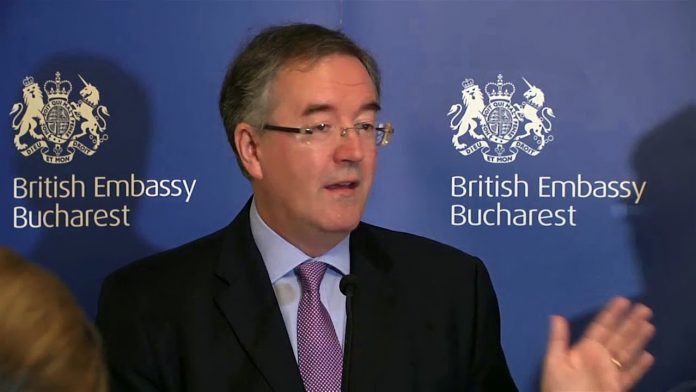 British Ambassador Andrew Noble has appealed to thousands of UK nationals in Romania to get their new post-Brexit residence documents before the Dec. 31 deadline and apply for a Romanian driving license, which is surprisingly easier than many would imagine.

The process is not too complicated, he said, stressing the Romanian government  “values” the British community and wants them to be “happy” in Romania.

In an interview with Universul.net  last week, the Ambassador said: “It looks as if more than ½ of the UK residents of Romania have not applied to get their new residence document. They need to apply by the end of the year, they need to do it really as quickly as possible.”

Pre-Brexit, there were an estimated 3,000 Britons resident in Romania, although some have since left. The embassy doesn’t maintain figures as nationals aren’t required to register with British authorities. British businesses often have international employees and don’t necessarily register with the embassy.

Most British residents live in Bucharest and the Ilfov area or in the northwest city of Cluj and Brasov, in central Romania.

But Mr. Noble said he was speaking because London and Bucharest don’t “want anyone to be left without the paperwork at the end of the year which gives them their EU-type rights and perpetuity.”

“It’s a very light process, nobody likes bureaucracy, but a bit of bureaucracy is an inherent part of life in any country…… We would encourage them to get it done as quickly as possible at their local immigration inspectorate office.”

Asked about what would happen in the case of nationals not registering by the Dec. 31, he said there had been no discussion between the British and Romanian governments on that scenario.

There are two ways for British nationals to legal live in Romania, either with withdrawal rights or a long-term visa.

In terms of paperwork: “the withdrawal agreement…. Is the lighter of the two,” he said.

He pointed out that the Romanian government has been “very active in spreading the message and writing to everyone for who they have contact details,” explaining the process.

„Solutions have needed to be created for problems that never existed before.  We have met a very friendly and open mind to create the lightest possible burden for people.”

“The Romanian government  is absolutely clear that it values  the British people who live here, wants them to stay and be happy  and we found that expressed in every discussion we’ve had with them.”

The process typically takes 30 days, with complications reported in some cases.

One category of people who may not have understood they need to apply for new papers are long-term residents.

“They think they are OK.  They haven’t changed but the legal basis for their stay has  changed because we are not an EU member state and therefore they need the new form of permanent residence.”

“They might be the people who think they are fine “I’ve been resident for seven years.” They are not fine,” he said. “There’s no problem with substance, but they do have to get a new card.

British citizens living across the EU are facing the same problems. Each country has its own rules. In some countries, individuals don’t need to do anything.

Romania’s British  community is far smaller than in Bulgaria, a smaller country where 30,000 British nationals live, most of them retired. It also pales in comparison to the Romanian community in the UK. Some 1,000,600 are registered as living there, more than double 2018 estimates.

The Ambassador said his appeal was „a final push to ensure people use available time. December’s always busy, it’s worse weather. Our plea is to do it now while you feel like a walk down to the immigration office.”

“You also can’t use a British driving license to drive in all EU countries, like France,” he added. People can swap their licenses without passing the Romanian test, although will be required to pass medicals as per Romanian law.

“If you have a Romanian driving license, you can use it in every EU country and Britain and when you become resident in the UK again, you can exchange it for a British license with no questions asked.”

“You can’t have a license for a country you are not resident in. People say I have. If you are not living in the UK, it’s not legal for you to have a British driving license.”

COP26. Greenhouse emissions down, renewable energy up in Romania, but air quality takes a toll-UK Ambassador