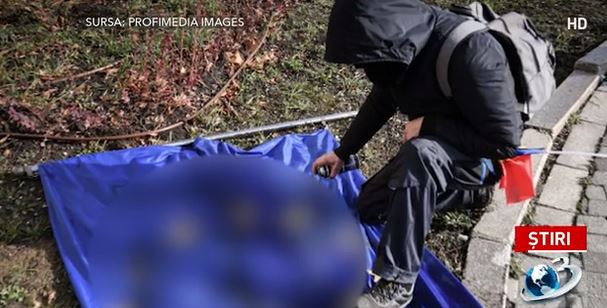 A photo of a protester spraying a swastika on the European Union flag outside Romania’s Parliament has led to renewed calls for a far-right party to be outlawed.

The incident happened on Tuesday after dozens tried to storm the Parliament in protest at a debate on introducing the Covid pass in the workplace. The protest was organized by the nationalist Alliance for the Union of Romanians.

The image was picked up in the international media which reported on the protest. Cars from the U.S. and Japanese embassies parked inside the Parliament perimeter were sprayed with paint as protesters rushed toward the building.

Alexandru  Muraru, the government representative for combating anti-Semitism called the incident „flagrantly illegal. (It) needs to be punished swiftly and firmly,” he said Wednesday.

It is „insulting for the memory  of those that lost their lives in the German concentration camps and their descendants.”

„It is an instigation to violence and hate and damaging to Romania’s reputation,” he said.

Romania passed a law in 2006 which bans fascist and racist organizations and symbols.

Mr Muraru repeated his call for the AUR, the protest organizer, to be outlawed.

He called it „a neo-Legionary group which uses Parliament as a loudspeaker to broadcast admiring messages about war criminals.”

„Extremist messages in the Romanian Parliament are unacceptable… and only lead to xenophobic public incidents.”

The party which came from near nowhere to take fourth place in 2020 parliamentary elections is known being anti-vaccine and opposing Covid restrictions.

It talks about national ‚sovereignty,” favors reunification with neighboring Moldova and is wary of the-EU. It also talks about family values, and is implicitly anti-gay.

Some 135,000 Jews living under Hungarian control in northern Transylvania were also killed in the Holocaust. Most surviving Jews emigrated to Israel under communism. There are about 3,000 Jews in Romania today.