It’s the hottest December on record, good for motorists planning trips in the holiday season, but the lack of snow is bad news for winter sports and Romania’s only ice hotel which won’t open for the first time in 15 years.

Forget about a white Christmas. Weather forecasters are predicting tropical weather over the holiday season with temperatures soaring to a balmy 20C.

For those who want snow, they’ll have to get their hiking boots on and climb to 1,800 meters.  Even then, there are doubts the snow will lay as it’s too warm with daytime temperatures reaching an estimated 4 to 5 C.

There was a record temperature of 21 C in Buzau to the east of the Carpathians this week.

The lack of wintry conditions is showing in hotels’ vacancy rate in mountain resorts. The ski slope at Predeal currently offers 919 vacant hotel rooms, the one at Azuga has 865 rooms which aren’t occupied and Sinaia  has 766 free rooms.

Tourists can find snow in Sinaia, but only above 2,000 meters, and none on lower slopes. Artificial snow isn’t much good as there needs to be a temperature of -4C for the snow to be viable, authorities said.

“There was snow for the holiday on December 1 in the resorts and people went skiing, but not now,” said Anda Popa, the general secretary of the Association for the Promotion and Development of Tourism in the Prahova Valley.

“There hasn’t been snow for years in the resorts, just up in the mountains,” Popa said. “One year the snow came in February and tourism operators’ takings were down,” she said.

She said tourists who spent the holidays would have plenty on offer even without the snow with tourist packages at hotels and hiking through the mountains.  There just not much on offer for those “who enjoy winter sports.”

Already, 2019 has been the warmest year on record.

The famous Balea Lac ice hotel in the Fargaras Mountains says it can’t open due to the warm weather and has canceled all its bookings from Dec. 20 to Jan. 20.

Romanian and foreign tourists who had already made reservations have had to find somewhere else to celebrate the New Year.

Construction on the ice hotel usually begins at the beginning of November, when managers employ 40 workers from the city of Targu Mures to craft Romania’s only hotel made entirely from ice.

Only this year, the lake in the Fagarasi Mountains at an altitude of 2,000 meters didn’t ice over.

This week, it was a warm 11 C at Balea Lac, the highest temperatures there ever recorded, according to meteorologist Narcisa Milian, even warmer than in 1989, it was 9.6 degrees

On Monday at lunchtime, it was just above freezing, and there was 60 centimeters of snow.

Temperatures will be 8 to 8.5 degrees warmer than normal for this time of year up until Christmas and about 4.5 to 5 degrees warmer for the last week of the year, Elena Mateescu, general director pf the National Meteorological Administration said.

It will continue to be unseasonably warm for the first two weeks of January. 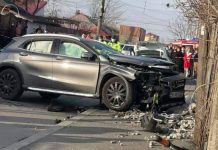