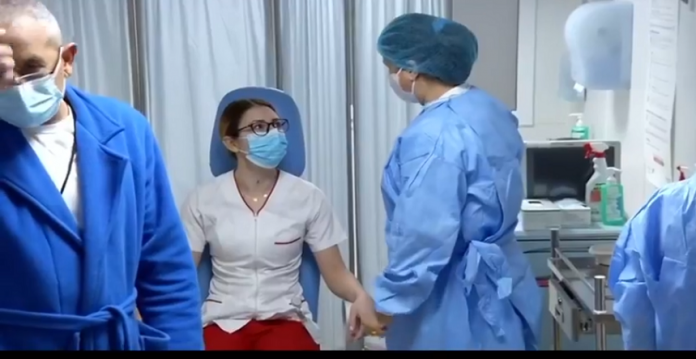 Romania on Sunday kicked off its anti-Covid-19 vaccine campaign with health care staff the first to get inoculations.

The first person to be immunized with the Pfizer-BioNTech vaccine was 26-year-old nurse Mihaela Anghel, at the Matei Bals National Institute for Infectious Diseases in Bucharest, Hotnews reported.

Fifteen health care staff were given jabs at in the northwest Maramures region as the campaign got underway, Vasile Bonaţ manager of the Dr. Nicolae Ruşdea Hospital in Baia Mare told Agerpres news agency.

“The immunization shot against Covid-19 is the quickest and surest way of coping with the pandemic and limiting the spread of the virus,” Prime Minister Florin Citu said.

He said the shot was free and there wouldn’t be restrictions placed on people who didn’t want to get the vaccine.

The first batch arrived on Saturday in Romania and was stored at a military-run storage facility ahead of inoculation planned for nine hospitals.

The next batch of 140,000 jabs will arrive on Monday and be delivered to 370 vaccination centers in hospitals throughout Romania.

Romania will receive 10.7 million vaccines from the European Commission. The mass vaccination will start in the Spring and authorities hope 60-70% of the population will be inoculated in the next six months.

Although the EU planned a coordinated rollout across the bloc’s 27 nations, Germany, Hungary and Slovakia began giving out their first coronavirus vaccine shots on Saturday shortly after receiving their first shipments.

The first shipments of the vaccine arrived at hospitals across the EU in refrigerated  containers late Friday and early Saturday after being sent from a manufacturing center in Belgium before Christmas.

The first shipments were limited to just under 10,000 doses in most countries, with the EU’s mass vaccination programs expected to begin only in January. Each country is deciding on its own who will get the first shots, but they are all putting the most vulnerable first.

President Iohannis. Romania ready for anything in Ukraine, best thing would be “for Russia...