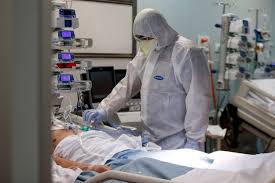 There were a a record 557 patients with the virus in intensive care units around Romania. The number of patients in ICU has steadily risen since Sept. 21.

The latest figures came after just 6,162 tests were carried out in the last 24 hours giving an infection rate of 20.63%, more than three times the usual recent rate. Testing drops over the weekend.

Romania has now reported a cumulative total of 122,944 cases while 99,344 patients have recovered from the virus.

The Strategic Communication Group said there are over 7,500 patients are in hospital.

Most new cases were registered as usual in the capital, which had 235 new infections, followed by the northeast region of Iasi which saw 172 fresh cases.

Fifteen men and the same number of women died  after catching the virus in the last 24 hours including someone in their 20s, another in their 40s, two in their 50s, and the rest over 60. All but one had preexistent health conditions such as diabetes, cancer or heart disease.