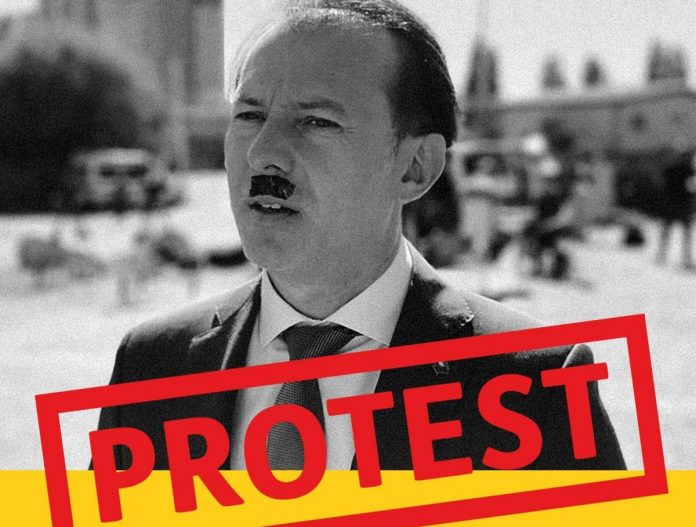 Romania’s advisor on anti-Semitism issues has lodged an official complaint after the prime minister was depicted as Nazi Party leader Adolf Hitler.

Alexandru Muraru on Saturday filed a petition to the general prosecutor and the anti-discrimination board over a defaced image of Premier Florin Citu in which he appears with a Hitler-style mustache.

The image was posted by George Simion, a leader of the far-right Alliance for the Unity of Romanians (AUR) on social media. It had more than 19,200 likes and was shared more than 4,100 times.

Mr Muraru, who is also a deputy leader of the Liberal Party,  said  he’d filed his complaint “for instigation to violence” by associating the premier with Hitler. There was no immediate reaction from AUR.

Mr Muraru, the special government representative for fighting anti-Semitism and Xenophobia said the “scandalous caricature .. that compares the prime minister to the most atrocious dictator in the history of Europe, isn’t merely just a major calumny. (It is)  an unacceptable insult to the millions of victims of the Holocaust.”

He claimed the party was employing “ever more violent methods and instruments”  to “make Nazi and fascist symbols part of public life.”

The party shot to fourth place in December 2020 parliamentary elections, less than a year after it was established. It is generally anti-EU, anti-foreigner and homophobic. Its support base consists of people who consider the pandemic a hoax, distrust authority and are anti-vaxxers and anti-maskers.

Inciting people “to violence, hate or discrimination against a group of people because they are a member of a certain category” has a penalty of up to three years in prison, or a fine.

The lawmaker also filed a complaint to the National Council for Fighting Discrimination.

“Nobody, even less so a public person, should be allowed such slips which violate basic human rights,” he said.