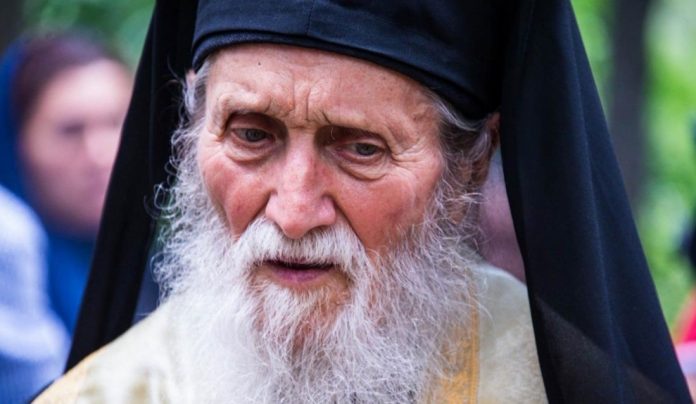 Romanian Archbishop Pimen whose charitable works, fight to recover church land seized by the communists and decades of service were soured by his collaboration with the communist-era Securitate, has died after catching the coronavirus at the age of 90.

Pimen, who real name was Vasile Zainea, died early Wednesday at the Matei Bals Hospital for Infectious Diseases in the Romanian capital after suffering a heart attack, a month after he contracted the virus.

He is the most senior public figure in Romania to succumb to the virus.

The Romanian Orthodox Church said that his name would forever be connected to “the protection of the splendid Bukovina monasteries,” or the painted monasteries built in the 15th and 16th century in northern Romania which are UNESCO heritage sites and one of Romania’s top tourist attractions.

In a sign of the high regard the church holds, Pimen was transported from northern Romania by helicopter with another patient on April 20 to Bucharest. The archbishop was given blood plasma from patients who’d recovered from the virus.

He also was given the anti-viral medication Remdesivir and was one of 20 patients to receive an experimental blood-filtering treatment pioneered in the U.S.

But while the treatment may have prolonged his life, he eventually succumbed to his symptoms.

Pimen entered the church as a monk in 1951 as the communists were consolidating their regime and rose to become one of the highest ranking clerics of the Romanian Orthodox Church after communism ended in 1989.

It was while he was at the Putna Monastery that he attracted the attention of the foreign department of the Securitate. He visited or was stationed in Israel, Germany and the U.S. in the 1970s where he provided information to the agency.

After communism ended, Pimen was appointed Archbishop of Suceava in 1991, a position he held until his death.

After communism ended, Pimen fought for the return of 167,000 hectares confiscated by the communists, a case which the church lost. He managed to reopen monasteries that closed during the communist regime and supported the building of homes for elderly and vulnerable people.

He also wrote or supported the publication of books that explained scripture and the Orthodox faith to ordinary people.

His reputation grew after he helped set up a visit by King Michael to the painted monasteries in 1992 when the exiled monarch visited the country legally for the first time since  his 1947 forced abdication.

After years of rumors and allegations, Romania’s highest court in 2012 upheld the conviction that he secretly served as an informant for the country’s communist-era Securitate police.

Pimen was found guilty by a government council of serving as an informant sent by the church and the Securitate to spy on fellow clergy and members of Romania’s expatriate community in the United States in the 1970s.

Pimen said priests were obliged to inform and insisted he didn’t harm anyone. He appealed the 2012 conviction saying he had never formally signed an oath promising to be an informant.

Pimen’s trials as a priest were a perfect example of the challenges Romanians in high-ranking positions had to face under communism, particularly anyone who came into contact with foreigners.

Some willingly collaborated with the Securitate, others were blackmailed, and others were lured into the agency with the promise of a stellar career.

Even 30 years after communism ended, Romania’s hasn’t had a transparent reckoning with its past. Senior officials, including President Traian Basescu, collaborated with the Securitate, but it was only after he left office, that the suspicions were officially confirmed.

The Securitate spread its tentacles into all walks of life and generated an atmosphere of mistrust.

The Romanian Orthodox Church has opposed opening the files of its senior clergy from Romania’s 1945-1989 communist era.