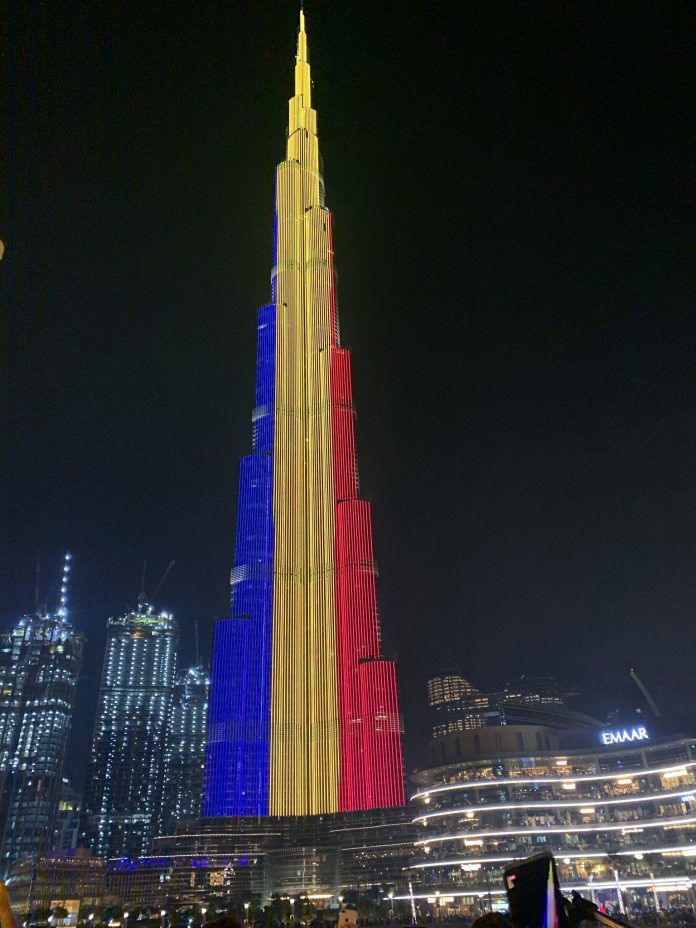 Millions of Romanians around the world have made their presence felt as landmark buildings were lit up in the colors of the Romanian flag to mark the country’s national day.

Some Romanian women and men donned national costumes on Sunday, ‘ie’ hand-embroidered blouses, or embroidered waistcoats and posed together in Dubail to mark the day.

There are between three and five million Romanians abroad and they have become an active community with a growing political influence at home. A record 900,000 Romanians voted in the Nov. 24 presidential runoff which saw President Klaus Iohannis defeat ex-Premier Viorica Dancila in a landslide victory.

The message on the Burj Khalifa read: “A dream come true! Thank you, dear Romanians for taking part in this special moment! With the kindest consideration, Nicoleta Teodorovici, general consul,” said a Facebook post on the page of the Romanian Consulate General in Dubai reads.

The Atakule Tower in Ankara was lit up in the colors of the Romanian flag.

The Dublin Convention Center shone with red, blue and yellow lights, thanks to Romania’s ambassador to Ireland, Manuela Breazu.

‘Happy birthday’ to Romania and to the Romanians living in Ireland,” according to a Facebook post of the embassy.

The Dublin Convention Center is considered an architectural landmark. It was designed by the Irish-born American architect Kevin Roche. Construction started in 1998 and the building opened in 2010.

Also in Ireland, the town hall in Cork carried a Romanian flag to mark the day.