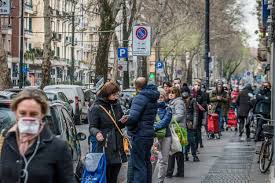 Timisoara, the biggest city in western Romania, is the country’s new Covid hotpot.

Mayor Dominic Fritz imposed a new lockdown this week following a council vote after coronavirus cases rose to above 7 per 1,000 residents in the city of about 310,000.

Medics have warned that they are running out of beds in the city’s hospitals’ intensive care units. The situation looks grim even at a national level where cases have soared.

On Friday, Automobile Bavaria Timisoara, which sells BMW models in Romania made by the German vehicle manufacturer, announced it was making eight BMW cars available to the city to help out “in the most difficult period of medical history in the last 100 years.”

It said it was „a gesture of empathy and solidarity.”

Automobile Bavaria Timisoara representative Ekkehard Kraemer signed an agreement with Timisoara mayor Dominic Fritz on Friday to use the cars to transport „vulnerable” people who need to get around the city during the lockdown. The cars are offered for free and available 24/7 under the agreement.

Romania has seen a spike in the last week, with more than 5,000 new single-day cases reported in the past two days. There were 106 Covid-19-related deaths on Friday.

In Timis county, 339 new cases were confirmed on Friday and the county now has the second highest number of cases after Bucharest since the pandemic began.

“Human solidarity combined with German technology of BMW cars are resources…. which can offer a vital public service to the Timisoara community,” a press statement said.

Automobile Bavaria Timișoara believes in corporate social responsibility which is why it is offering the community eight BMW cars as a concrete gesture of empathy and solidarity for the most vulnerable people during the lockdown.”

“We want to get back to normal and see the Timisoara  economy become dynamic again, but until then, we are offering technology to help the community via the Timisoara city hall.”

The statement added that “human solidarity and professional competence” of all professionals was “the hope of us all to eradicate this pandemic.”