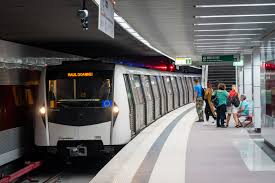 After years of debate and delays, Romania’s government on Saturday said a long-awaited subway line linking Bucharest to the Henri Coanda airport will go ahead.

The M6 line will run through the northern part of the capital and out to the airport in Otopeni.

A memorandum was signed Saturday. It will accelerate the bidding process and contracts for the north and south of the city, state secretary in the transport ministry Ionel Scrioşteanu said.

Romania secured a non-reimbursable loan from the European Union in 2018 to extend the M6 line from the 1 May Boulevard to the Baneasa Mall. But it didn’t include the segment from the mall to the airport.’

Earlier this year, Transport Minister said the line was dogged by ‘feasibility problems’ and the investment of ‘hundreds of millions’ of euros wasn’t worth it.

It was not clear where the extra funds and change of plans had come from. Money will most likely come from the EU recovery plan which will be used to upgrade transport infrastructure.

The official confirmed the project is part of a strategy to develop transport between Bucharest and Ilfov, where the airport is.

The line will link three railway stations, including the Gara de Nord and the Gara Baneasa before heading north to the airport in the town of Otopeni, about 20 kilometers from Bucharest.

There is currently an overground train from Bucharest’s Gara de Nord to the airport, opened was opened last year.

“We consider this complementary to this investment. About 60% of the passengers who use this Bucharest-Otopeni train aren’t from Bucharest,” Scrioşteanu said.

The new subway line will primarily be used by people in the capital of more than two million.

The Henri Coanda airport is used by people in southern and eastern Romania. People living in northern Bulgaria also use the Bucharest airport.

“This new investment, which was signed last year, also includes (an improved) rail link between Bucharest and the Giurgiu, a Danube port which borders Bulgaria, about 60 kilometers south of the capital.

“This will facilitate the access of Bulgarian passengers to the Otopeni Airport, “ Scrioşteanu, said according to Agerpres.

Romania’s government pulls the plug on subway to Bucharest airport