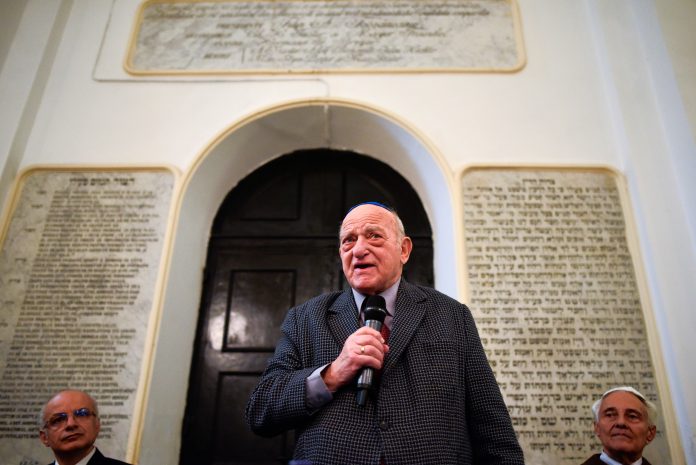 Aurel Vainer, the leader of Romania’s Jewish community who in his years of public service promoted tolerance and called out discriminatory or undemocratic attacks will step down as leader of the dwindling community this week.

Aurel Vainer, 88, hopes his departure from the federation and public life will pave the way for a younger leader who will be elected at a congress this week.

Romanian Jews suffered horrific persecution during the Holocaust when Romania was allied with the Nazis. Hundreds of thousands were deported and perished or died in pogroms.

Romania’s Jewish population has plummeted from 800,000 before World War II to fewer than 10,000 today.

An economist, Mr. Vainer became deputy chairman of Romania’s Chamber of Commerce in 1990 and was elected to represent the Jewish community in 2005.

He also served as a lawmaker holding one of the 17 seats in Parliament allocated to the country’s ethnic minorities.

As a leader of Romania’s Jewish community, Mr. Vainer made his name as someone who sought tolerance and respect between different groups.

Only this week, he stepped into a row after a Social Democrat Aurelian Badulescu said Romania’s ethnic German president, Klaus Iohannis was ‘a Nazi.’

Mr. Vainer called the attack “nationalist and backward” in an interview with Radio France Internationale.

“We know the Jews suffered during World War II because of the Nazis, but that doesn’t mean we generalize and sat ‘right, everyone who has German roots is a fascist or a Nazi.’ You can’t allow that.”

“It’s not true, the president behaves well with all Romanian citizens, including all the minorities … we can’t have these falsehoods being perpetrated. You can’t say that President Iohannis is a Nazi. It’s wrong.”

Under his leadership, some Jewish buildings were restored with the help of Jewish groups outside Romania.

Aurel Vainer was born in 1932 in Stefanesti, in far north Romania and bordering what later became the Soviet Union.

He later joined a leftist youth Zionist movement and moved to a kibbutz near the Black Sea port of Constanta, preparing to emigrate to Israel.

He didn’t manage to get on the ship and resigned himself to his fate of living in Romania.

Hundreds of thousands of Jews emigrated to Israel during the communist era.