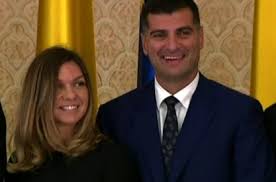 Romania’s Simona Halep has won two Grand Slams in her stunning career as a tennis player, and is one of the richest female athletes in the world.

She’s made no secret of the fact that she would love to become a mother and settle down. Over the years, rumors have swirled about her getting married. She has sometimes publicly denied the reports.

But the tennis star has now confirmed that she will marry her fiancé, Romanian businessman Toni Iuruc next week in her home city of Constanta two weeks before her 30th birthday.

The former no. 1 confirmed the news on Tuesday when she returned from the US Open after losing to Elina Svitolina of Ukraine who advanced to the quarterfinals.

She said that former tennis great Ilie Nastaste had given the game away when he told reporters he’d been invited to attend her nuptials in mid-September.

“It’s a different kind of excitement than winning a Grand Slam. It’s my private life, while tennis is tennis,” the WTA no. 13 said at Henri Coandă Airport in Bucharest.

It will be the first marriage for the Romanian champion and the third for her husband-to-be who is 42.

The pair were first spotted as a couple after she won Wimbledon in 2019.

The Romanian is one of the richest female athlete in the world and has earned 37.5 million dollars during her career according to WTA. Her fiancé is also a millionaire and reportedly owns a number of companies in Romania.