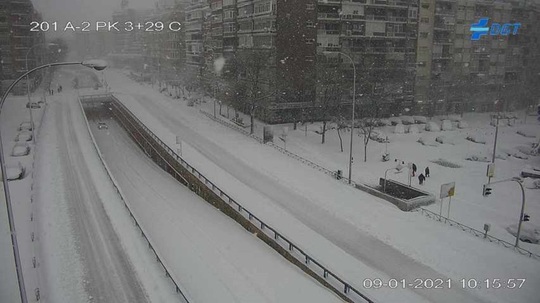 Snow fell in the capital and southern Romania overnight Sunday, bringing down trees, an electric pylon and damaging cars. There were no reports of injuries.

Forecasters said after two days of snow in Bucharest and other parts of the country, freezing polar temperatures would sweep Romania.

The Bucharest- Ilfov Inspectorate for Emergency Situations issued an amber warning for the capital and nearby areas on Monday.

Authorities said 16 trees had fallen, some of them crashing on to cars. Ten cars in Bucharest were reported to have been damaged by the trees and an electric pylon which crashed.

Thousands of homes were left without heating and hot water in two Bucharest districts on Sunday after a major pipe was damaged.  It was later repaired.

About half the city’s residents are connected to a centralized heating system operated by the city hall.

Almost three-fourths of the pipes that provide heating and hot water to the capital of more than 2 million are almost 40 years old. It’s estimated that 2,600 tons of hot water is lost every hour during the cold season, G4Media reported last year.

After a mild winter, the overnight snow was the first real sign of winter in the capital. Forecasters say it will snow through Tuesday followed by an icy spell which will really grip the capital starting Thursday when it’s won’t go above freezing.

Temperatures will plunge to a low of -15C over the weekend in Bucharest and the surrounding  area, and only revert to above freezing on Jan. 20.

The rest of the country will also be gripped by the cold spell from January. 15 to 20, forecasters said Monday. Temperatures will plunge to -12 to -14C.