Romania has reported 237 new cases of the novel coronavirus, more than 20% higher than the previous day.

The surge in cases came as Parliament is split on whether to extend the state of alert that was imposed in mid-May to stop the spread of the highly contagious virus.

Opposition parties, headed by the Social Democrats, the largest party in Parliament, say they will vote against it. They say it is time for restrictions to be lifted.

Most medical experts in Romania favor keeping the state of alert, as infections are not yet under control.

The head of the Emergency Situations’ Department,  Raed Arafat, said Romania “wasn’t in a state of normality yet.”

“We still have the risk of of coronavirus infections, especially as the number of cases alternates from one day to the next,” he told Digi24. There were several days when far fewer than 200 cases a day were recorded, and then on Wednesday, the daily infection count rose to 196 before the jump on Thursday.

President Klaus Iohannis on Tuesday urged lawmakers to approve a month-long extension to the state of alert. He said some restrictions would be lifted, with malls, private schools and kindergarten allowed to reopen, but he said the lockdown couldn’t be totally relaxed yet.

Romanian authorities said Thursday that some 21,182 people had been diagnosed with the disease since the outbreak, while the death toll rose to 1,369 .

Nine deaths were reported in the past 24 hours. The patients, whose ages ranged from 40 to over 80, all had underlying health conditions.

There are 153 patients currently being treated for the illness in intensive care.

Meanwhile, some 15,280 patients have recovered.

There are 2,213 people in institutionalized quarantine and more than 101,000 people in self-isolation at home under medical supervision.

More than 531,000 tests have been carried out nationwide.

Mayoral ballot in Romania sets stage for parliamentary elections, and Bucharest is too close to call 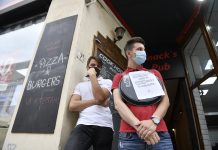