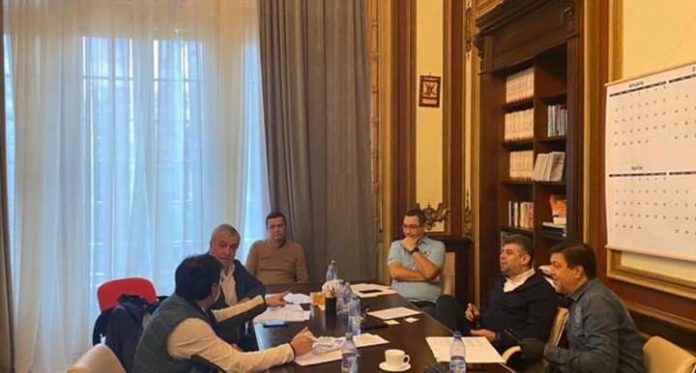 We’re on the edge. Waiting. If on other past occasions it was up to us to radically change our fate (and we kind of missed it), now we can at most just improve it a little. By staying at home and helping with money or at least encouraging those struggling in hospitals.

This is the first time when we can give a positive meaning to our long-practiced passivity. And when we can use the phone or computer not only for likes or angry emoticons, but also to donate for the doctors’ equipment and intensive care units.

Until now, powerlessness has been a choice. Today, it is imposed by the nature of the threat. We are trapped in a viscous moment and we look outward from a bubble of sticky fear, which paralyzes our thoughts and paroxysmally amplifies our anxieties. Related to life, family, work, who we can be, when it is over. From a distance, one hears how the tsunami of illnesses and deaths caused by COVID 19 is roaring louder and louder, and the only question that matters is: how hard will it hit us?

Will it sweep us like it did in Italy, Spain, the United States, France? Or will it soften when it reaches us, in a tide that will not leave tens of thousands, but hundreds, maybe 1000 – 2000 dead? The final (a word whose definition is still being worked on) will find us relieved that we were spared by fate and that we didn’t have too many losses? Or on our knees overwhelmed by the scale of the devastation and the details of individual tragedies?

No one can give the answer now. It depends, to a large extent, on how aggressive the new coronavirus will prove. We have exceeded the point where the actions of the state could have made a significant difference. The crucial moment was consumed when an official decision expressed the thought that we cannot turn the back on the compatriots who went to work abroad (each, according to his/her possibilities) and now decided to return.

Would it have been better if the hundreds of thousands of Romanians who arrived within two weeks had been quarantined, isolated, not in over-crowded facilities, as soon as they entered the country? Obviously! But such a logistical effort would have been a challenge even for South Korea. What chances of success would such a performance have had if implemented by a Ministry of the Interior that proved its competence and professionalism for three years by blindly listening to the orders of Dragnea and the PSD barons and throwing tear gas at the protesters in Victoria Square? None.

While we are waiting for the big viral assault to come to an end, we can do something useful besides praying to God. We could reflect on our condition. Especially on the fact that the quarantine caught us locked in a perverse relationship, along with those who have already sickened us more than the new coronavirus could, although they should have protected us against numerous dangers over time.

Some of those together with whom we are trapped are abusive, others are thieves, other fools, or all at the same time. There are those who, instead of building high-performing hospitals, stole much of the money and handed them over to the most incompetent and most servile lackeys. There are those who have always managed to thrive at the expense of “losers”.

COVID 19 finds us fragile also because we did not manage to get out of these twisted and  toxic relationships quickly enough. We were on the point of extracting from the Parliament and the local administration the most toxic segment of a political class specialized in robbery and perpetuating mediocrity. We did not have the opportunity to quickly take this first essential step, initiated last year, in the European Parliament. Dragnea’s accomplices received an unexpected helping hand from a microorganism that started to teach a lesson to the human race and that makes no difference between Pope Francis and Serban Nicolae.

But the political survival of those who systematically destroyed the Romanian state’s ability to defend itself against internal and external parasites, after the crisis is over, is not the worst thing that can happen to us. It would be worse if, at the end of the pandemic, the aggressors would come out even stronger. And we would be even weaker. This would really be the apocalyptic end of the horror movie in which we are extras.

Because the COVID 19 meteorite will surely kill some dinosaurs. We just don’t know who the dinosaurs are yet. „We” or „they”? Now, we seem sure that it will be „they.” That after the crisis is over, we will finally settle accounts with the bunch of fools and bastards to whom we have given the right to decide who lives and who dies in this country. However, I’m not sure it will be like this.

For three weeks, all the dregs of the Romanian politics have entered the battlefield. With the same televisions and news sites with which for 15 years they have been attacking the strategic partnerships with the West, the fight against corruption and institutions they could not buy, they are now trying to put all the problems of the medical system only on the shoulders of the present power and to erase the memory of the incompetent and corrupt governments they used in order to embezzle public money.

Unfortunately, the current power provides them with enough ammunition to take their attacks to the most vulnerable segment of the population. The way in which the government, but also some local leaders, have addressed many of the challenges for which they could have prepared earlier and better, despite the „heavy legacy” of chronic problems, creates the conditions for the end of the pandemic to see PSD and their satellites reinvigorated again and ready to set up a National Salvation Front again.

Do you find it to be an exaggerated fear? It is not. It all depends, as I said at the beginning, on the balance of the contagion. If we escape relatively well, we have a chance to settle accounts with the trans-party power system that destroyed not only the public health system, but also the citizens’ trust in authorities and raised trenches among Romanians: between doctors and patients, between state employees and those in the private sector, between ordinary and „special” pensioners, between taxpayers (who will carry the heaviest burden of the economic effects) and those paid to serve them (who will escape with intact incomes).

If the new coronavirus wreaks havoc in Romania too, the pro-PSD propaganda will finally catch on. Again, as it did in 2010 too. Because it will make the most of the emotional fragility of a much-tried society and it will adjust to fit the natural need to find the culprits that can be punished.

What we have seen for a few days with Tăriceanu, ecstatic that the divine providence has recovered him from the garbage can and given him another chance, will be taken over and amplified at the tenth power in the inquisitional sets of Antena 3 and RTV. The accusations that Iohannis and Orban „knew and did nothing” to prevent the effects of coronavirus will psychedelically alternate with images of bereaved families to justify their political assault. I’ve seen this movie before.

The photography with Ciolacu, Tăriceanu, Ponta and Șerban Nicolae discussing measures to help the population is not just an image exercise. Rested, with their pockets full, supported by the army of journalists they pay for even when they are in opposition, they are really getting ready to go back to the switchboard.

Not even in their most beautiful dreams have they hoped for such a providential gift as the pandemic is for them. Therefore, they will fiercely fight not to waste it. This was seen in the Parliament, when they passed with maximum efficiency their own variant of helping citizens and companies, although it is as burdensome as the 40% increase in pensions.

But it’s just the beginning. It will most likely follow the appointment of Șerban Nicolae at the steering wheel of the Senate. And the extension of the parliamentary session by one month, maybe two. Why? To give themselves time and continue the populist circus they started on Tuesday. They will go on with the festival of aid measures, which they just don’t sustain from their own money! To demonstrate to the people how supportive they are with all the categories affected by the predicament of our poor country – COVID 19 and the liberal government.

It is sad that at such times, when reason is crammed into a corner of the mind, scared away by fear and pain, there will be many who will swallow the bait. What could happen next? Depending on how things progress, the growing number of illnesses and deaths and intensification of attacks against the Government will provide them with the pretext to pass a censorship motion and install their own government. Possibly one of „technocrats.” Which will organize both local and parliamentary elections.

We’re on the edge. After such a trial, which will severely affect millions of people, in a variety of ways, with a shaky economy, a PSD returned to power on the wave of popular emotion would be all we would ever need! Because everything that will have to be urgently repaired in the state-citizens relationship at the end of the pandemic, the big settlement of accounts that could mean that all the suffering was not in vain, will be postponed to the very, very long term.