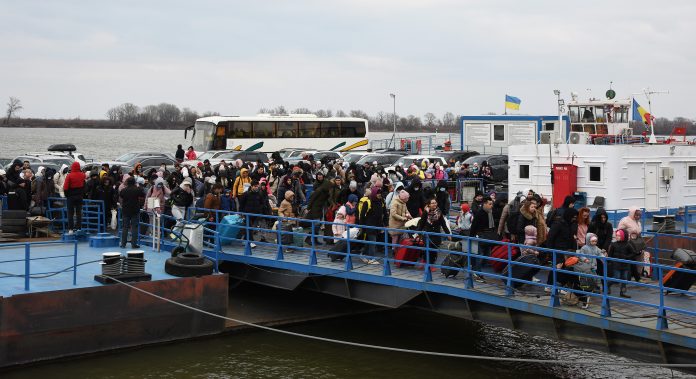 More than 1,000 Ukrainians fleeing the invasion of their country crossed the Danube  into southeast Romania on Saturday where they were met by volunteers offering accommodation and food.

Border officials told Universul.net that 1,700 entered Romania from Ukraine on that day  at Isaccea of which 1,100 were Ukrainian nationals.

Romania shares a 615-kilometer with Ukraine.  Romania’s northern and eastern border is the external frontier of NATO and the European Union and strategically important.

Isaccea which is on the Danube River is the only crossing point into Romania and the European Union for people living in south Ukraine.

Romanian authorities say since the invasion began on Thursday, some 28,000 refugees have arrived in Romania.

They have been met with overwhelming donations of food, hygiene products. Some Romanians have opened their homes and hotels to Ukrainians.

Groups such as “Uniți pentru Ucraina” (United for Ukraine) have organized themselves using social media where Ukrainians can ask for  advice and help. Romanians have offering everything from hotel accommodation and pet food.

Moldovan nationals living in Romania have used the group to coordinate relief aid. Like Ukrainians, they speak Russian and  have acted as translators, putting refugees in touch with volunteers and authorities.

The parking lot outside the passport control was heaving with people helping with donations, transport or accommodation on Saturday.

Religious associations and members of fishing clubs from nearby cities and towns on the Danube offered help. Others simply dropped off  their donations and left.

One couple, Alexandra and Florin drove four hours Saturday morning from the capital Bucharest. They came with bags of food for people who had fled fighting in the Odessa Oblast (county).

They said they acted in a spirit of solidarity and said they were skeptical authorities could manage the influx of refugees.

They said they would stay until the evening and would host a Ukrainian family in Bucharest.

At 5pm, a ferry operating at full capacity docked in Isaccea. The passengers were mostly women and children who were traveling on foot.

Ukraine has banned men aged between 18 and 60 leaving the country as they might be called up to fight in the war.

Many waited at Orlivka on the Ukrainian side of the border. For people traveling by car, the wait is longer and lines have stretched for kilometers in recent days.

Due to the extraordinary circumstances, local authorities have scrapped the ferry’s timetable and the service has been extended to nighttime.

Mr. Morar said Tulcea county is a “transit area” for Ukrainians as most continue their journey to other countries, or other parts of Romania.

Tulcea county  can host about 1,200 refugees in private and public accommodation, such as homes and a school hall.

Defense Minister Vasile Dîncu said on Feb. 22 that Romania could host half a million Ukrainian refugees, but it is unclear where they would stay. Many ordinary Romanians or hotel owners have made offers of help and others have donated food and hygiene  products.

The outpouring of support  is in stark contrast with the Romanian government’s response  during the 2015 refugee crisis.

It was one of the EU countries that was reluctant to agree to quotas recommended by the European Commission.