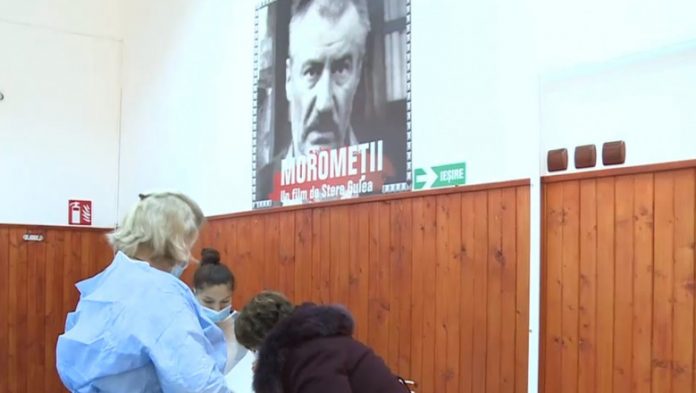 Nothing much distinguishes the sleepy village of Talpa which lies on the plains of southern Romania except that once it served as a location for a communist-era blockbuster starring some of Romania’s most talented actors.

That was more than 30 years ago, however. But Talpa, which means “sole” in Romanian, is now back on the map after it opened a vaccine center that is drawing people from hundreds of kilometers away.

Unlike another village Hotarele, which is in the neighboring Giurgiu county, Talpa isn’t noticeably trying to benefit from the medical tourism, despite the place it holds in Romania’s film archives.

However, recent visitors to the sleepy and rundown village, southwest of Bucharest, have heard that Morometii was filmed here in 1987. After their inoculations pay a visit to some of the old film locations.

The film is based on the Romanian novel Morometii by Marin Preda. It tells the story of a family  featuring their problems and topics such as marriage, taxes, revenge, friendship and the Army.

Romanian actor Victor Rebengiuc has the lead role of Ilie Moromete and Luminita Gheorghiu is his wife Catrina Moromete. She more recently won international recognition for her roles in The Death of Mr. Lazarescu and Child’s Pose.

The late Gina Patrichi also stars as Guica, the sister of Ilie Moromote.

Fast forward 34 years. The vaccine center is housed in a community hall, which has geraniums in the windows and forgotten Christmas  decorations on the outside walls.

Curiously, there are posters of the film pinned up inside the vaccine center.

Radu, a student in the UK, who is from Bucharest  told Digi24 there’s weren’t any slots for jabs in the capital so he came to Talpa for his Covid-19  AstraZeneca shot.

Digi24 reported there were available vaccine slots in Talpa as the vaccine center offers AstraZeneca. Some Romanians are reluctant about the vaccine fearing side effects following reports of blood clots.

However, people have traveled from Bucharest and farther afield for inoculations this week. Between 25 and 35 people get vaccines every day.

Doctor Elena Badea, a vaccine coordinator told Digi24 that people were traveling hundreds of kilometers to get their vaccines here.

“They come from Bucharest, from Craiova (a city in southern Romania) and even the Republic of Moldova hundreds of kilometers away,” she said.

The station reported that visitors wanted to visit some of the places where Morometii was filmed, even though there were no signposts or local guides.

The only signs of the movie are a couple of streets named “Moromote” and a local resident Niculina said she had a walk-on role in the film and has fond memories.

Other than that, Talpa is like any other southern Romanian village, with geese, ducks and dogs and rundown houses.