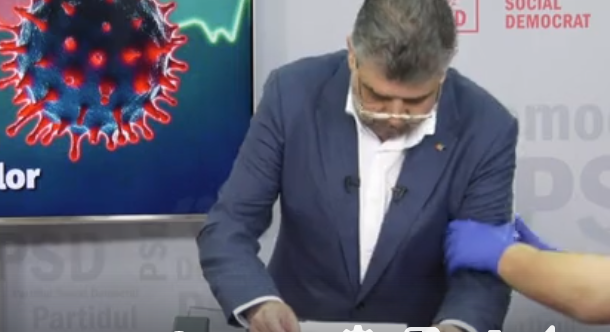 The PSD leader quickly left the hospital, saying that he is perfectly healthy, which means that it is possible, indeed, for him to have fainted because of the accusation of national treason levelled at him by Klaus Iohannis, as Paul Stănescu says, very convinced. Or maybe because of the dizzying figures he was reading. What figures? Those in the PSD program, „We restart Romania,” which no one paid attention to after Marcel Ciolacu’s hospitalization became the main news of the day:

Tax exemption for family doctors; staggering the fiscal obligations of companies for three months; the suspension until the end of the year of the payment of income tax, CAS (social insurance contribution) and local taxes for the second quarter, for all companies in many domains affected by the crisis; days off for employees, paid in advance.

Plus a long list of measures to help tourism, which involve the construction of highways, roads, street infrastructure, utilities, spas, hotels, restaurants, sports and cultural centers and much more.

There are two things which Omar Hayssam’s former hunting partner did not get to say, because he started trembling: how much would all these wonderful measures that his party so generously proposes cost and where will they get the money to support them.

No wonder, PSD has always found ways to pull a vanishing act when it comes to the two crucial questions. Most often, they left the government when there came the bill for the populist, uncovered measures they had adopted. And they have always used their propaganda machine with maximum efficiency to blame someone else for their gross mistakes.

They won elections due to demagogic texts such as those recited by Ciolacu on Sunday, they got entrenched in power with the help of massive percentages provided by the gullible, meanwhile they took care to scoop up for themselves the resources they had promised to put at the service of the economy and society, after which, when the due date came, they let others make up for the damage.

The PSD members have fabulous luck! No sooner do they leave the government and there comes someone else who has to repair everything they have destroyed, than an economic crisis emerges. And the recovery becomes extremely difficult, because a terrible wind starts blowing from the front, while all the populist measures are ticking in the backpack.

The best example, one that should freeze the blood in our veins, is the one from 2010, when Băsescu and Boc settled the robbery and populist squander left behind by Geoana and Tariceanu. What I saw, on Sunday, in Ciolacu, is a carbon copy of what PSD did, exactly ten years ago, when they made Băsescu responsible for the deep crisis which had hit Romania and which they had provoked to a large extent, exacerbating the effects of the global recession. They even gave the president instructions as to what action to take.

Today, the situation suits them better because the crisis is even worse. Therefore, the tear-jerking scene that PSD, Ponta and Tăriceanu have been playing since the beginning of the pandemic, in which they claim to be seriously worried about the fate of citizens and entrepreneurs (which they plunder every time they come to power and to whom they now promise the moon and the stars), has even greater chances to be successful. How?

On the one hand, because the effects on the private economy and the citizens not working in the public sector are so severe that the pressure on the government to solve the problems is proportionate. From here, it turns out that the risk of them not satisfying everyone and, actually, almost anyone 100% is very high. Two, the political instability they have begun to generate systematically – a motion of censure, the postponement of elections, the cancellation of fines and much more – will pose even more problems on the Liberals and make it difficult for them to restart the economy.

The latest issue of The Economist unravels this: everywhere in the world, the big problem for the economy, in the medium term, will be generated not by restrictions of various kinds imposed by governments, but by the individual options of each citizen to avoid crowded places, to limit expenses, to travel less, to postpone investments, out of caution.

Why? Because while lifting restrictions is a relatively simple matter for governments and can be done „overnight,” individual options are much more difficult to reverse.

The best demonstration: a comparison of declining consumption patterns in Denmark and Sweden. While the restrictive measures taken by Sweden are at the opposite pole from those in Denmark, the way in which consumption has decreased in the two countries is carbon copied.

What does this mean, concretely?

That the countries which will be able to restore the confidence of the citizens not only from the perspective of keeping the pandemic under control, but also giving them the feeling that things as a whole have re-entered a good, positive, upward path, will exit the crisis faster and maybe even strengthened. While countries that may have managed to limit the number of deaths and infections quite well will continue to struggle for a long time to come, if the social and political atmosphere remains dominated by tension, conflict and uncertainty.

Here we return to PSD. The frantic series of populist statements and bombastic promises raises the level of expectation towards the authorities even in the minds of the most rational and balanced people. We all expect exceptional measures from the Government, commensurate with the effects of the calamity, very few of us are willing to accept that the level of available financial resources is extremely low, because we come after three years of irresponsible Dragnea – Tariceanu governance.

Two, the political instability that PSD, Ponta and Tăriceanu programmatically fuel, because they have no other card to play, will perpetuate the state of uncertainty and fear for the future that the pandemic has already instilled in us. Without a rapid recovery of confidence, consumption will not increase, so there is little chance that the economy will recover quickly.

The conclusion: we have already entered the post-pandemic political season, in which the public agenda will no longer be dominated by the number of dead and infected people, nor by restrictions, nor by gestures of solidarity, but by the fate of the economy.

The red triplet will attack from all positions, insisting that the government is indifferent to the needs of entrepreneurs and citizens, that it does too little for them. The powers that be will defend themselves by boasting about what they do and make no mention of the things they cannot do, because very few will be willing, emotionally, to accept the limits of the Romanian state’s power of intervention and will focus on the signs of incompetence more than those of helplessness.

Unfortunately, the simpler the game of PSD and acolytes and the easier it is to dismantle their populist promises, the harder it will be for the Liberals and the President to live up to the expectations and needs of the people. They will have to do five times more than they would have done in normal times so as not to lose a large margin of the voters’ confidence.

If they do not succeed in working miracles, PSD will emerge stronger from this crisis. Because chance has handed them the opportunity of a comeback on a plate. A totally undeserved opportunity.

Due to the PSD-PNL / Tariceanu partnership, Romania experienced the most dramatic economic collapse in Europe in the crisis of 2009. Remember who were the irresponsible ones who overcharged the state expenses in 2007 and 2008, who diverted the resources from investments to populist measures and took us from + 9% to -9% in just one year, look at what they are doing now, look at how their allies in the Constitutional Court have mobilized and you will notice that they are preparing to serve us, again, their classic recipe for disaster.

If their game is successful, the growing epidemic of wickedness before our eyes will wreak more havoc than the coronavirus!

P.S. Those who are tempted to believe that the solutions waved by Ciolacu, Ponta and Tariceanu can save us should remember how much the generosity of their parties cost us ten years ago. Here are the measures that the PSD – PNL / Tariceanu alliance took, when the signs of the international crisis could no longer be ignored and which made Romania the most affected country on the continent:

During Tariceanu’s government, over 400,000 additional civil servants were employed in the public system. More than half of this increase occurred in 2007 and 2008.

During the same period, salary benefits increased by 76%.

Between September 2007 and October 2008, there were four increases in the pension point.

The increases in 2008 and 2009 marked the beginning of a profound imbalance in the social security budget, a situation which has not been remedied to date.

Thus, the increases decided upon in 2007 led, in 2008, to a hole of 1.4 billion lei in the social insurance budget. Whereas the increases in 2008 brought the deficit, in 2009, to 6.4 billion lei. How were the differences covered? From external loans but also from other taxes collected by the state. Profit and income tax, VAT, excise duties.

The pension deficit exploded in 2010, reaching 11 billion, after the Constitutional Court rejected the Boc government’s attempt to limit the effect of Tariceanu’s disastrous policies by returning the pension point to a lower, sustainable value. The CCR’s decision to keep the artificially motivated electoral increases imposed by the PSD-PNL tandem forced the government to increase VAT from l9% to 24%.

Worse, even today we have not been able to return to the situation before 2007, when for pensions we did not need to take money from other taxes than those on labor. The money that goes to cover this deficit is money taken from essential investments, which we can no longer afford. That is now the source of our underdevelopment.