Storm Darcy brought heavy snow and travel disruption to the UK, Netherlands and Germany at the beginning of the week while Eastern Europe basked in milder weather.

But after an unseasonably warm and sunny period in some parts of Romania, wintry weather will return in the coming days, forecasters said Tuesday.

Meteorologists issued an amber warning for wind and rain in many parts of the country later Tuesday, after hours of sunny weather in the capital and elsewhere.

Meteorologist Alina Serban said the weather will steadily get colder in the following days, bringing snowstorms and temperatures will fall to  -10C and even -20 C in some places.

“There will be rain especially in the west and northwest,” while in north and northeast Romania „it will fall below freezing and there will black ice,” she told Digi24.

“In the mountains, and in south Transylvania and in the southeast Dobrogea region, temperatures will dip below freezing while winds will gust up to 80-90 kilometers an hour in the mountains.

She said it will continue to be mild in the south, southwest and central Romania, but temperatures will plummet overnight Thursday.

A wave of deep cold will give Romania a blast of frigid weather, the meteorologist said, bringing sleet, snow and black ice. 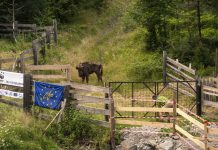