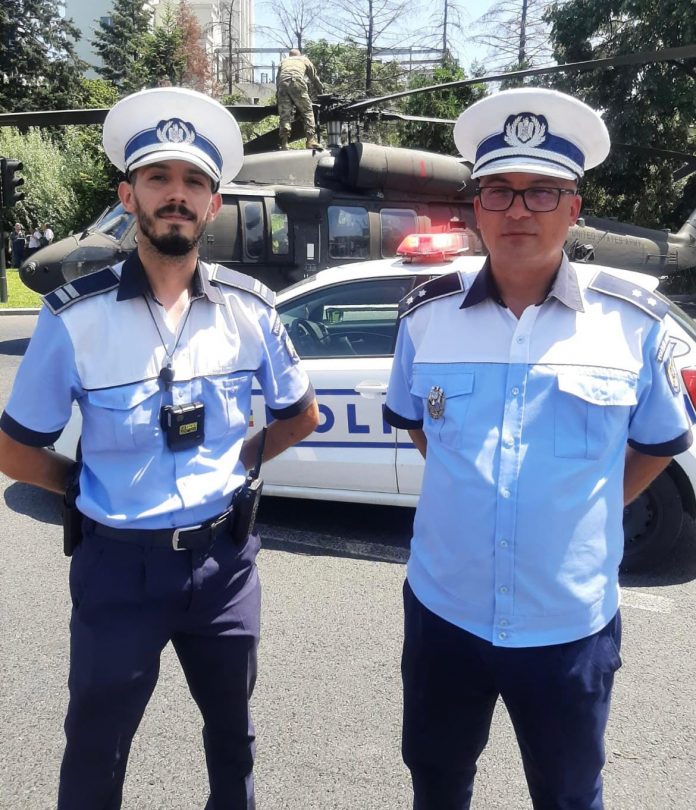 Two traffic cops were directing traffic in one of the busiest areas of the Romanian capital on Thursday morning when they heard a powerful rush of wind.

The gust was so strong that their car seemed to lift off the ground.

They were right next to the Charles de Gaulle square in downtown Bucharest, which has five exits.

„They immediately went to see what was happening and they saw a helicopter  (U.S. Black Hawk) in the air which hit a street light and was coming towards them”, the interior ministry said on social media.

“Their instinct kicked in”.

One of them told the other to block traffic at the Arc de Triumf artery in the western end of the square.”I’ll go on the other side”, said a police officer identified as Beinur.

In a matter of seconds, they raised their hands and stopped traffic coming into the square.

“The helicopter was unstable and managed to land on the roundabout”.

After the U.S. military helicopter landed the pair went to check on the pilots and radioed the headquarters.

“Divert traffic away from Charles de Gaulle square! A helicopter has just landed”, they said.

The ministry said the two officers remained there until the helicopter was removed, hours later.

“They are Beinur and Adrian, who had quick thinking and managed to avert a disaster”.

Nobody was injured when the U.S. Army chopper made a forced landing Thursday.

The copter  lost altitude and hit  two street lights as it landed on a roundabout.  They damaged two stationary cars in the process.

The chopper was doing rehearsals with Romanian helicopters ahead of Romania’s aviation day on July 20.

The defense ministry has canceled participation of all aircraft in aviation ceremonies this weekend.

The U.S Embassy said it was aware of the incident and following developments. It said it was working closely with Romanian authorities.