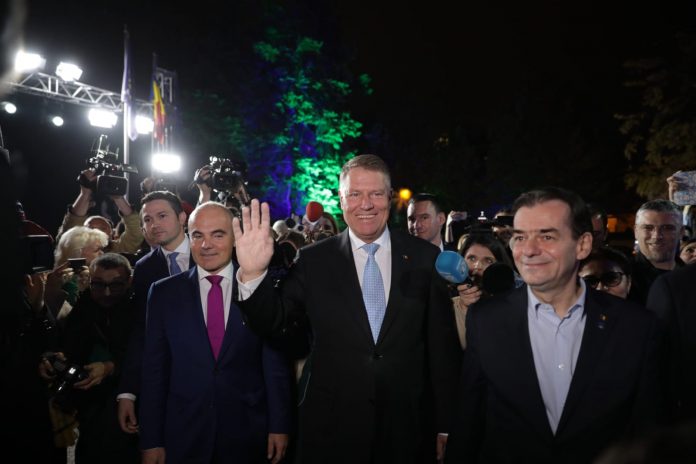 Fanatic supporters of Romania’s president are far and few between. The former mayor of the Transylvanian town of Sibiu generally doesn’t evoke great enthusiasm even among his voters. The strongest rhetoric about Klaus Iohannis comes from the opposition Social Democrats who call him a “Nazi” and “a dictator.”

Yet, Mr. Iohannis, an ethnic German, is the clear favorite to win this weekend’s presidential race against his challenger, the former Social Democrat Prime Minister Viorica Dancila.

If some Romanians occasionally say they wish he’d be more ‘Romanian’ _ joking, jostling, inventive, and pressing the flesh, he is also appreciated for his steady ‘Saxon’ temperament and his good reputation among Western leaders.

He’s seen as a safe pair of hands, someone you could leave in charge of a house full of 10-year-olds for the weekend, without a major disaster occurring. He’s an adult in a country where some politicians can seem like rebellious teens.

In a televised debate on Tuesday, Mr. Iohannis listed arguably his greatest achievement during his term in office. “Without me, the rule of law in Romania would have broken. It didn’t, it remained standing, the fight against corruption continued and I corrected the catastrophic image projected by the Social Democrat governments abroad.”

But his election to the highest post in the country also says something interesting about the country and its history.

Polls show that most Romanians are pro-European and pro-Western. That is not to say their history does not include pogroms against the Jews and Roma where hundreds of thousands were killed, but there is also an openness to some of the country’s minorities that is unusual in eastern Europe. There is currently no nationalist party in Parliament.

“Romanians aren’t as naïve and gullible as people think,” said Vlad Zigarov, a program manager at LSE IDEAS, a foreign policy and international strategy think tank of the London School of Economics. “We are not this backwater, and we haven’t adopted the illiberalism seen in Hungary and Poland,” he told universul.net.

Before being elected president in 2014, Mr. Iohannis, was the mayor of Sibiu for 10 years where he “brought to life an otherwise dead backwater. It was a sleepy provincial town, and it became a bustling metropolis,” he said.

When Romania joined the European Union in 2007, Sibiu was named the European Capital of Culture, the first city in southeast Europe to receive this title.

“Mr. Iohannis connected Sibiu to the West, to tourism, to international companies,” and Romanians liked this, Mr. Zigarov said.

Appealing to undecided voters during the debate, Mr. Iohannis pushed his credentials. „I am not in Romania by accident. It was a conscious decision and I’m happy I remained.”

Romania’s ethnic Germans, Saxons and Swabians, historically enjoy a good reputation among Romanians. They were invited to the region by a Hungarian king in the 12th century to defend the territory from the infidel, and are seen as civic-minded, good administrators who cooperate well with Romanians.

More importantly, they have no territorial grievances or claims against Romania unlike the 1.2 million ethnic Hungarian community.

“Maybe some in the European Union were surprised Romania elected a German president in 2014, but for those who know the history 100 years ago, there’s an explanation,” said Romanian historian Prof. Adrian Cioroianu in a program on Romania’s public television TVR.

“They are a hard-working and well-balanced community,” said Mr. Cioroianu.  “Saxons surprised some European observers by supporting the new Romanian state of 1918, “ which now included Transylvania, he said.

Saxons organized their own celebration a month after reunification where they congratulated the Romanians and publicly offered support to the “kingdom of Romania.” In the interwar period, ethnic Germans, made up 4 percent of the population.

There are now just 36,000. But their presence remains strong in Transylvania through their fortified churches which are UNESCO heritage sites. Some Saxons who emigrated to Germany during the communist era and the early 1990s still own property and return every year.

Romanians’ openness to other groups doesn’t stop at the Transylvanian Saxons. Prime Minister Ludovic Orban is half Hungarian and former chief prosecutor Laura Codruta Kovesi who is now the European chief public prosecutor was married to a local Hungarian.

Romanians say that non-Romanians have contributed to development and reforms.

Romania’s British-born Queen Marie, the granddaughter of Queen Victoria, was instrumental in Romania’s 1918 reunification and remains popular. The 48-year reign of King Carol I allowed the rapid establishment and the strong economic development of the state which began the process of modernization.

“Carol saw the country’s potential, and he began to work; you can see some beautiful buildings from his era in Bucharest.”

“It’s like a blanket was lifted from our eyes.”