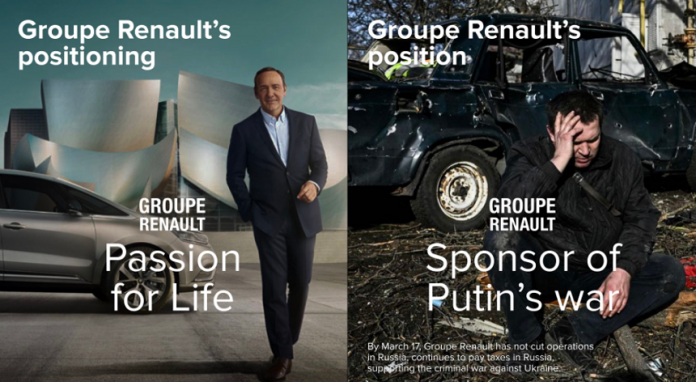 French carmaker Renault says it has suspended all activities at its Moscow factory.

The announcement on Wednesday came after Ukrainian leaders called for a boycott against the company, and accused Renault of „sponsoring Russia’s war machine.”

On Tuesday, Renault had said it was  resuming production for only three days.

Regarding its involvement in major Russian car manufacturer AvtoVAZ, which is owned by Renault, the French carmaker said that it’s „assessing the available options, taking into account the current environment, while acting responsibly towards its 45,000 employees in Russia.”

The company also said it is „already implementing the necessary measures to comply with international sanctions.”

„Renault, Auchan, Leroy Merlin and others must stop being the sponsors of Russia’s war machine,”he said.

„Renault refuses to pull out of Russia. Not that it should surprise anyone when Renault supports a brutal war of aggression in Europe,”  the minister said in a tweet. „But mistakes must come with a price, especially when repeated. I call on customers and businesses around the globe to boycott Group Renault.”