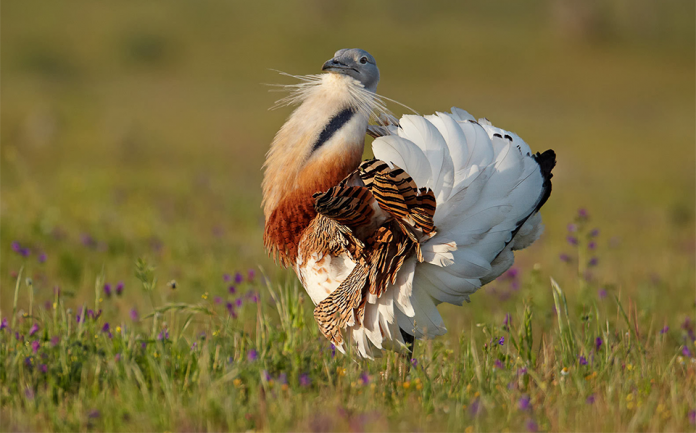 Half a century ago, the great bustard roamed happily on Romania’s grassy plains.

But excessive hunting of the bird, prized for its tasty meat, and industrialization after the communists came to power led to its disappearance from Romania.

In an exciting development for ornithologists, the great bustard has recently been spotted in eastern Romania.

The endangered bird was sighted recently on Braila Island near the Danube. Experts are surprised by its reappearance and say that if it is protected from hunting and allowed to live undisturbed in its natural habitat, it could be saved from possible extinction, adevarul.ro reported.

There have been rumors for several years that the great bustard had returned, but nobody managed to photograph one.

However, locals recently found a female bustard in a field in eastern Romania when she was foraging for food. They watched from a distance and filmed her.

Bustards are large birds and resemble turkeys. Bustards are  the largest flying bird in the world, even heavier than swans and pelicans.

Bustards live on grasslands and are adverse to wet conditions including snow. Moisture makes it hard for them to fly so they become an easy prey.

They were hunted due to their flavorsome meat which tastes a bit like partridge.

Romania had a large population until the 1950s, when they were culled by hunting and buildings spread into their habitat.

They are currently listed as ‘vulnerable’ by the International Union for the Conservation of Nature.

They are easily startled noise from tractors, cars and carts scares them and they are liable to run away and abandon their eggs.

There have been reported sightings in Bihor and Banat in the far west of Romania but no photographic evidence.

They could be found on the Baragan plain, in parts of Transylvania and Banat, a plain in southwest Romania.