Movie goers at the annual Risnov History Festival have handed “King Michael: The Journey Home” with the “People’s Choice” Award at its 14th annual screenings.

The 55-minute Romanian documentary telling the story of the dramatic and difficult story of the late King Michael’s life-in-exile beat 12 other films from the U.S.,  France, Chile, Argentina, Australia and Romania.

“I am very happy with the result, notably because it was the “Peoples’ Choice” Award and that matters most to me.  I am especially happy to learn the majority of voters were young people,” said John M. Florescu, the Executive Producer.

The film’s Writer/Director is Trevor Poots. Previously, the Anglo-American pair of producers worked together on “The King’s War,” (2016), “Queen Marie: Heart of Romania” (2018), the current “exile” film on King Michael, among more than 20 docu-films for the US and UK markets.

Irina Margareta Nistor, the head of the festival jury said: „the mostly young viewers who are fascinated by the historical past, had to choose among 12 documentaries.

In June, “King Michael: The Journey Home” registered the highest audience score of all films screened at TIFF both in and out of competition: 4.85 out of 5, being declared by festival director Tudor Giurgiu as „the most loved film by the people”

The docu-film, that premiered in October 2021 which was mostly shot in Switzerland and Great Britain, set a nation-wide viewing record for “one-off” programs on the HISTORY Channel since the network began broadcasting in Romania.

In Western Europe, the film – under the name “The Last King Behind the Iron Curtain” – aired on Sky HISTORY to mark Queen Elizabeth’s Jubilee in June. Her late husband, Prince Philip appears in the film in audio form in comments on his childhood friendship with King Michael. It aired in over two dozen countries worldwide.

The original TV broadcast of “The King’s War” and “Queen Marie: Heart of Romania” aired initially on ProTV to  high ratings before its subsequent distribution on the HISTORY Channel.

“King Michael: The Journey Home” has had good reviews from journalists, diplomats, and civic leaders in Romania.

UK historian Dennis Deletant, an expert on modern Romanian history, called the movie “an impressive, balanced and faithful portrait of the King.”

The program’s historian is professor and writer Matei Cazacu based in Paris. 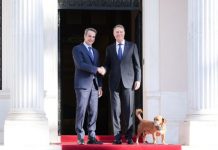