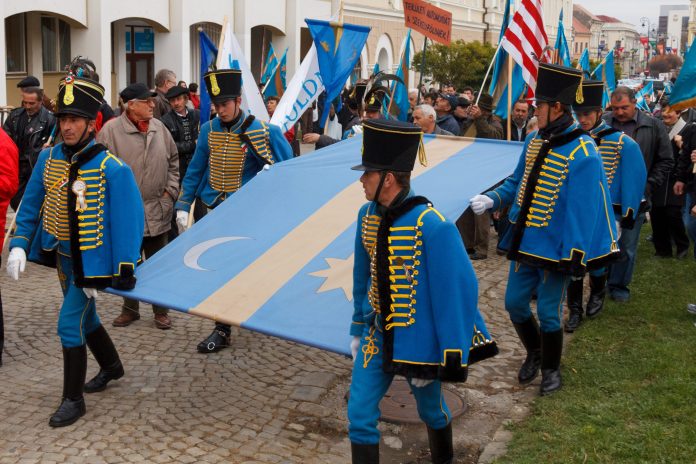 Romanian President Klaus Iohannis has accused the Social Democrats of striking a secret deal with Hungary’s Viktor Orban to give the Hungarian ethnic minorities more rights in the Transylvania region.

Iohannis claimed the Social Democrats the country’s largest party, were plotting to give “Transylvania to the Hungarians,” but the party moved to distance itself from the draft law.

Parliament’s Chamber of Deputies tacitly adopted the law on Tuesday, without a debate or vote. Senate will debate the initiative on Wednesday.

The proposal says Hungarian will become a second official language in state institutions in the counties of Mures, which has a large number of Hungarian speakers, and also in Harghita and Covasna where ethnic Hungarians form the majority.

The area, known as Szekley Land, would fly its own flag and have more autonomy to pass its own laws and manage its own finances.

There is unease in Romania over neighboring Hungary seeking more influence in the region. Transylvania was part of the Austro-Hungarian empire until 1918.

The proposal was put forward by two lawmakers from the Union of Democratic Hungarians in Romania, the party that represents the interests of Romania’s 1.4 million ethnic Hungarians.

“What did the leader from Budapest, Viktor Orban, promise you in exchange for this agreement? “ Iohannis said. “Dear Romanians, you see what it means to have a toxic majority in Parliament.”

Iohannis is himself a member of Romania’s small ethnic German minority which settled in Transylvania in the 12th century. The Transylvanian Germans traditionally have enjoyed good relations with Romanians and also Hungarians.

Iohannis accused the Social Democrats of “fighting to give Transylvania to the Hungarians in Parliament’s secret offices” adding:  “as long as I am president, a law like this will not exist.” Romania’s president needs to sign off on legislation, although the president can only reject a law twice.

Social Democrat leader Marcel Ciolacu distanced himself from the draft and said it would be voted down by the Senate later Wednesday.

Former Prime Minister Viorica Dancila, also a Social Democrat, called it “an affront to the sovereignty of the Romanian state,” on a post on Facebook.