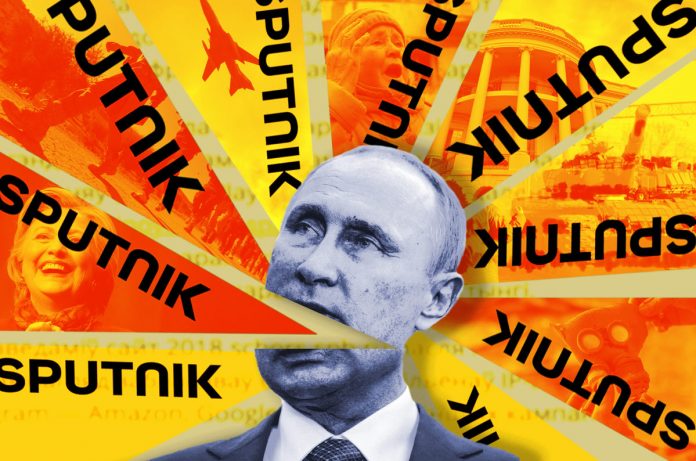 Russian propaganda topics and narratives are  regularly being updated and currently circulating by email, on WhatApp YouTube and elsewhere.

Universul.net takes another look at the latest  story lines coming out of the Kremlin. Disinformation is one of the weapons Moscow is using in the Ukraine war.

It is a mixture of false claims, outright lies, partial truths, falsehoods, and opinion dressed up as fact.

„Some Putinists use the whole arsenal, other pick a few themes. They are a mixture of actual agents and useful idiots,” former Culture Minister Theodor Paleologu says.

Russian propaganda puts forward the theory that World War II  Ukrainian Nazis I were more Nazi than the Nazis. It claims crimes committed by Ukrainian fascists are continuing today in the Ukrainian separatist republic of Donbas.

There is no mention of the Red Army, and crimes, rapes and robberies committed by the Russians on lands they „liberated”.  And n thing about the Warsaw Pact countries which were also “liberated” by the Soviets.

Hitler “only” targeted Jews, Gypsies and the disabled, while Ukrainian fascists exterminated any minority, starting with the Russians. They tortured them horribly first.

• “The Ukrainian army had regiments of executioners whose job was to kill non-Ukrainians. Entire Russian villages and towns were wiped out and inhabitants killed. Volunteers were right-wing extremists whose cruelty knew no bounds. When they caught Russians or Jews, „they tortured them before killing them. ”

• The Ukrainian Army is currently shelling  Russian villages and towns, as it did in 1941-1943.

• There were more killings committed by Ukrainian nationalists than by German Nazis.

The Babi Yar massacre  is  the largest single massacre in the history of the Holocaust until that date. The Nazis and their collaborators  murdered 33,000 Jews at the ravine over just two days.

Russian propaganda portrays it as directed and ordered by the Ukrainians, not by the Nazis. They describe the scenes of utter horror. The aim is to demonize Ukrainians and paint Russians and German Nazi soldiers as comparatively restrained.

Here is a passage: “The Ukrainian SS stripped them naked and then started raping women and girls, ignoring the fact their  parents and relatives were present. After the rapes….  Russian and Jewish women had their breasts cut off and sprinkled salt on their wounds, and the men were castrated.  Some of the prisoners had their arms cut off which were then put on the grill.”

• German soldiers refused to take part in the massacre and withdrew, leaving the Ukrainian executioners to carry out the genocide. The prisoners were killed in the most brutal way with firearms unloaded in the throat or stomach (to die in torment) or hit in the head with axes or scythes. After the massacre, the bodies were thrown into a ditch.”