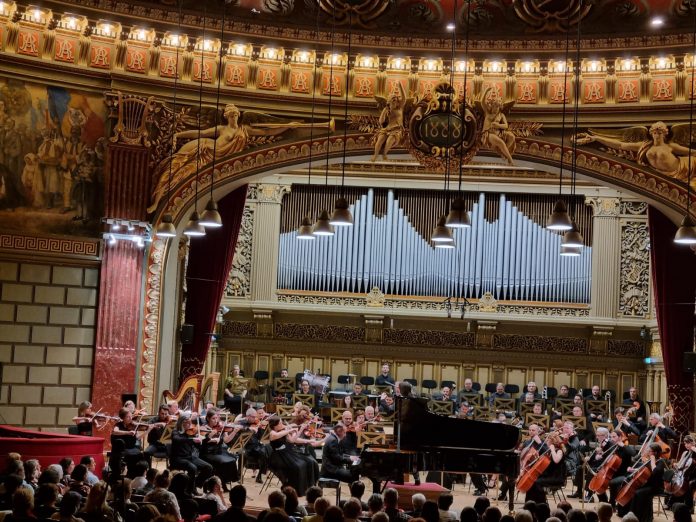 Spectators– some dressed in national peasant blouses— arrived early at the grand 19th century concert hall on a muggy summer evening for the two-hour musical treat.

June 24 is not only Midsummer’s Day  but also the Universal Day of the Romanian Blouse  or’ ‘ie’, the perfect evening for the finest classical concert in Bucharest this year.

The concert performed by  the Enescu Philharmonic was conducted by Romanian maestro Gabriel Bebeşelea, the brilliant young conductor whose career has taken him to Vienna, London and Moscow— the last time 10 days before Russia invaded Ukraine.

Many of the hundreds of concert goers came specially to experience the magic of Simon Trpčeski, the celebrated 42-year-old North Macedonian pianist who studied in Skopje under Russian Boris Romanov, who himself studied at the Moscow Conservatory.

And they were not disappointed. Spectators could be heard raving about his almost unearthly rendition of the music that seemed for a few moments to transport the audience to another dimension.

Mr Trpčeski was a BBC Radio 3 New Generation Artist and was honored with the Royal Philharmonic Society Young Artist Award in 2003.

In the interval, the Ambassador was seen chatting to Nicu Ion, a Romanian from a Roma family who moved to the UK in 2012, studied at university then became a math’s teacher and in 2021 was elected a local councillor in the city of Newcastle. Mr Ion went to the concert with his wife and daughter.

Sandra Pralong, an adviser to President Klaus Iohannis could be seen enjoying the heavenly music along with former ministers, foreigners living in Romania, and a host of music lovers—from students to medics.

Excerpt from Rachmaninov Piano Concerto no.2,
with the Enescu Philharmonic and my friend Maestro Gabriel Bebeşelea,
Bucharest, Romania, June 2022 pic.twitter.com/5uUUz8Iq2u

Rachmaninoff’s Piano Concerto No 2 is one of the most popular and recognisable concertos in the classical repertoire—adored by classical music lovers everywhere.

Widely enjoyed but played only by the most skilful pianists, it has been performed in concert halls consistently since it was composed in 1901.

It was written after a very dark period in the composer’s life. The premiere of his First Symphony in 1897 was disastrous and the piece was poorly received.

After the disastrous First Symphony, Russian composer and virtuso pianist Sergei Rachmaninoff sank into a deep depression and found himself unable to compose for three years.

When he finally premiered his Second Piano Concerto in 1901, his career was saved, opening to great critical acclaim and reaffirming his status as a world-class composer.

Principal conductor Gabriel Bebeșelea, 34, has focused on music of Enescu from his formative period, as well as of the composers who influenced him.

„I don’t  consider myself an expert in Enescu, just a very curious conductor, and this curiosity led me to the question: how was the composer Enescu born? Studying this subject on the basis of manuscripts, I discovered that Enescu managed between the ages of 13 and 15 in just three years to make a synthesis of three centuries of music,” he said in an interview.

„Every time I came to the Philharmonic I was glad to find a new mood and openess things that gave me even more zest in my collaboration with the orchestra. The philharmonicists showed extraordinary involvement even if some of the pieces were completely new for them.”